A study of an H-serialled Bristol F.2B Fighter, possibly of No 23 Sqn, over Tuckatoo and Hanna, Quetta, Baluchistan. The auxiliary tropical radiator beneath the engine cowling can be seen, and the crew are appropriately attired in sola topis. 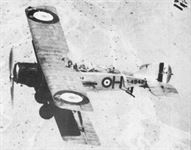 At first glance just a nice shot of Brisfit F4942 aloft over typical Middle East terrain. However, the bundle strapped along the fuselage top decking and over the gunner’s position is a Neil Robertson aeroplane stretcher - probably with an unfortunate airman trussed inside. 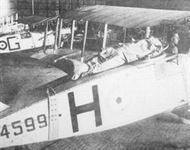 A close-up of the stretcher in position on Brisfit F4599. Note the flap which folds over to cover the patient’s (or victim’s) head and the securing strap around the aircraft's rear fuselage. F4599 is recorded as having served with No 6 Sqn in the Middle East. 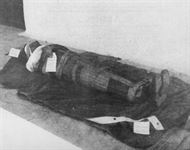 The inner secrets of the Neil Robertson stretcher, demonstrated by a mummified airman. Effectively rendering the patient immobile, the stretcher weighed 35lb and incorporated a face mask, pillow, chest piece "to be left quite loose" and a detachable blanket.

A Bristol Fighter, probably F4746, in an unfortunate position at Quetta as the result of an "error of judgement," according to the caption. The aircraft is fitted with wing-tip flare brackets and racks for eight Cooper bombs beneath the lower wings. It will be noticed that most of the tropical radiator has been blanked off.

Parnall N.2A Panther N7503 touches down on HMS Argus off Malta. Note the longitudinal arrester wires, which were caught by claws on the undercarriage spreader bar. A hydrovane is mounted forward of the wheels to prevent a nosedown ditching, and the two horizontal “rods” just beneath the lower wing are stowed flotation bags. The aircraft was built by the British and Colonial Aeroplane Co Ltd at Filton.

Bristol-built Panther N7453 after a disagreement with the deck of Argus off Malta. Well portrayed here is the elevated pilot's position in the hump on top of the fuselage. Entry to the cockpit was gained through the cut-out in the wing centre section. A two-seater, the Panther was powered by a 230 h.p. Bentley B.R.2 rotary engine.

Flt Lt D. F. McIntyre, later to be a co-founder of Scottish Aviation Ltd at Prestwick, flying Fawn II J7190 of 602 (City of Glasgow) Sqn, Royal Auxiliary Air Force, over the Tay Bridge. This aircraft joined the unit in 1928.
Fairey Fawn Mk II two-seater day bomber J7190 “2” of No 602 (City of Glasgow) Sqn, Royal Auxiliary Air Force, photographed while flying over the Tay Bridge. The pennants on outer interplane struts and rudder indicate that this was probably the CO’s aircraft. The first Auxiliary Air Force squadron, Renfrew-based 602 received Fawns in place of its D.H.9As in 1927 and flew them until 1929. A 470 h.p. Napier Lion II was the powerplant.