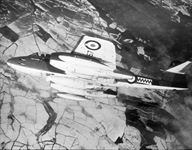 Meteor F.8 VZ467, from RAF Brawdy. Named Sir Winston, it is used as a target tug by the Tactical Weapons Unit and bears 615 Squadron colours.

The reduction in cross-sectional area made possible by the prone position is well shown here.

Mark Lambert on the couch and waiting to be strapped in.

WK935 was the last Mk 8 off Armstrong Whitworth's assembly line, and was modified by the Company.

The four electric screw-jacks shown on the left controlled the eye level, angle of thigh to body, thigh length and rudder pedal reach. Control was from the switches shown below the pilot's forearms. The static line, 10ft 6in long, was attached to the barometric capsule in the seat-type parachute pack and wound on the drum close by. There were two main harness junction boxes which could be released by depressing a lever on the front of the couch. Pulling the top lever under the windscreen withdrew the rudder pedals rearwards, jettisoned the ventral tank and retracted the nosewheel if it was down. Pulling the plunger below the lever caused an hydraulic ram to swing the rear half of the bed down and out into the airstream so that the pilot could drop clear as soon as he unfastened his harness.