Dispersed with EP688 at Gerbini on August 30, 1943, was this Spitfire Mk Vb, WR-Z, of No 40 Squadron SAAF. Both aircraft have the red roundel centres over-painted orange, as usual with SAAF aircraft.

Spitfire Vc EP689/UF-X of No 601 Squadron at Gerbini on August 30, 1943. Note the winged sword badge of 601 Squadron above the fin flash, clipped wing tips, and Aboukir filter.

One of a large number of Mk Vbs ordered from the Castle Bromwich factory on January 1, 1942, JK779, was, in common with most of the batch, delivered as a tropicalised Mk Vc. It is seen here at El Kabrit on January 15, 1943.

Believed to be SN-B of No 243 Squadron, Spitfire Mk Vc JK446 was a Castle Bromwich-built batch ordered as Mk Vbs in January 1942. Seen at Catania, Sicily on November 7, 1943, the aircraft has red and blue national insignia applied, apparently, over Type C.I. fuselage roundels and equivalent fin flash.

Spitfire Vc BR390/ZX-N of No 145 Squadron at El Kabrit, December 19, 1942. Note caps over cannon barrels and individual aircraft letter under the spinner. Code letters were red with white outlines. 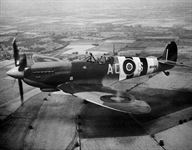 Another 601 Squadron aircraft, Spitfire HF.VIII JF447, seen at Gerbini, Sicily, on October 3, 1943. 601 was one of the few squadrons to retain its badge on operational aircraft during the war.

The parent unit of this Spitfire Mk Vb, EP688, was No 40 Squadron SAAF. One of the Spitfires combining the fighter and reconnaissance roles, it has the oblique camera port aft of the cockpit and Aboukir filter modifications to the carburettor air intake. It is seen here at Gerbini on August 30, 1943, and was eventually written off on April 26, 1945.

The later broad-chord rudder of the Spitfire PR.Mk XI is well illustrated upper right by PA846/F, seen at Comilla on August 4, 1944. Note the well-worn look and the SEAC-type fuselage roundels painted over Type B roundels.

One of the Spitfires providing photographic reconnaissance over Sicily was this PR.Mk XI, EN657, seen here at Ponte Olivio on August 16, 1943.