Today preserved in the R.A.F. Museum at Hendon, Hawker Hart G-ABMR is shown here in the 1960s when it had been painted to represent an aircraft ol No. 57 Squadron and restored to flying condition

Hart G-ABMR, Hawker's demonstrator, was restored to airworthy condition and painted in No. 57 Squadron colours after W.W.II. Since donated to the R.A.F. Museum, Hendon, where it now resides

Another "atmospheric" formation shot of Harts, provided by No. 57 Squadron

A Hart (India), probably K2088, of No 39 Squadron, then based at Risalpur, flying over Gilgit on the North-West Frontier in October 1933

First R.A.F. squadron to receive the Hart, in January 1930, was No. 33 at Eastchurch. K1430 in the foreground has a camera gun mounted on its lower port wing

The first of four Pegasus-engined Harts built by Hawker's for the Swedish A.F. The type was later built under licence in Sweden, forty-two further aircraft being completed

The Hart prototype, J9052, made its first flight in June 1928 at Brooklands; part of the embanked motor-racing track can be seen behind the tail. 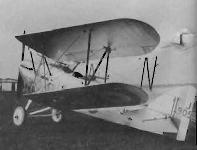 Harts (India) serving with an F.T.S. at Ambala in 1941. Note yellow-ringed fuselage roundels

Harts of No. 15 Squadron rehearsing for the 1935 Hendon Air Pageant. K3960, (foreground), was one of a batch built by Armstrong-Whitworth 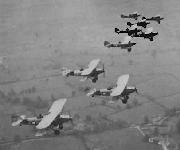 The prototype Hart Trainer, K1996, which first flow on 29th April 1932. It was actually the second production Audax modified

HAWKER PEGASUS HART. One of the radial-motor versions of the famous Hawker Hart family of the 1930s was the Pegasus Hart sometimes referred to as the "Swedish Hart" because it was licence-built in Sweden for Flygvapnet - the Royal Swedish Air Force.
G-ABTN (constructor's number H.H.3) was used both as a demonstrator and an engine test-bed. First with a Bristol Jupiter and later with the 625-h.p. Bristol Pegasus I.M.2 which gave a maximum speed of 177 m.p.h. and a service ceiling of 22,500 ft. for a loaded weight of 4,852 lb. (empty weight, 2,937 lb.). This photograph was taken at Brooklands in 1932. Later G-ABTN left Heston on 27th November 1932 for the Paris Aero Show. Returning three days later 'BTN met a watery end in the English Channel.

Produced for the S.A.A.F. the Hartbees was a close-support derivative with armour protection for the crew. "804" was one of four built by Hawker's and 65 more were completed in South Africa