Опытный истребитель NA-73X
The first of the British contract Mustang Is (AG345) as first rolled out; it has the short carburettor intake, no guns, and the serial number above the starboard and below the port wing.

An early photograph of the 10th production Mustang ready for delivery to the USAAF as the second XP-51, 41-039.

The sole A-36A tested by the RAF, as the Mustang I(DB), showing bombs and dive brakes.

The Mustang IA, in RAF service, was distinguished by its four-cannon wing armament. Of 150 built, the RAF received 93 and the USAAF the remainder, as P-51s. This photograph also well shows the oblique camera installation behind the cockpit.

The NA-73X prior to first flight, showing the short carburettor air intake. The position of wing gun ports has been painted on the prototype, but the nose gun ports are real. They were replaced by fairings before first flight, however, and black anti-dazzle paint was added ahead of the cockpit. This photograph, still taken before the registration NX19998 had been applied, was retouched before being issued by North American to depict, rather badly, USAAC tail stripes.

AG345 in RAF camouflage but still in the USA; the carburettor intake is shown lengthened.

A P-51A-1 from the first USAAF production contract placed for the fighter version. 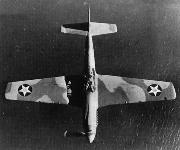 The camouflage pattern identifies this as an RAF Mustang I, despite the US insignia. It is AL958, retained in the US for flight development.

The second Mustang I (AG346) before delivery, with short carburettor intake, and nose guns fitted.

The second Mustang I (AG346) at the A&AEE in November 1941, with lengthened carburettor. Orthochromatic film has changed the tones of the roundel colours.

Externally almost anonymous, this is in fact the sole P-51 acquired by the US Navy, bearing on the fin the BuAer serial number 57987, and the designation P-51 on the rudder; no separate Navy designation was assigned.

An A-36 in North Africa, with yellow ring round the fuselage and wing insignia, yellow wing bars and red spinner.

Mustang I AG348 before delivery. As the fourth production Mustang had been set aside for the USAAF, this was the fifth airframe (although the fourth for the RAF), and not, as sometimes recorded, the Mustang that became 41-038.

Mustang I AG351 on test in the UK, with Prototype markings.

The P-51 41-37427, one of the 55 aircraft of this type retained by the USAAF from a 150-aircraft Lend-Lease contract for Britain. They had wing cannon armament and, at first designated P-51-2-NA and later F-6A, they had cameras for the tactical recce role.

An A-36A dive-bomber in North Africa.

Mustang Is entered service with several RAF squadrons in the Army Co-operation role. Depicted is an aircraft of No 26 Squadron.

One of 10 RAF Mustang Is that were shipped to the Soviet Union. Of the 320 aircraft ordered on the first contract, another 20 were lost at sea during delivery from the USA.

Also in Italy, in 1944, an A-36A of the 27th Fighter Bomber Group. The 190 bomb symbols along the fuselage may indicate number of bombs dropped rather than missions flown.

A trial installation of the wing cannon was made in the Mustang I AM190; shown with USAAF insignia, it later came to the UK.