A Mustang III as delivered to the UK, with original canopy.

Serving with No 61 Operational Training Unit, late in the war, this Mustang III displays a small dorsal fin fitted retrospectively after its adoption on the P-51D.

One of the two P-51s converted to Merlin-engined XP-51B prototypes by North American;

A North American P-51C, serial 42-103222, showing that this Dallas-built variant was externally identical with the Inglewood (Los Angeles)-built P-51B.

A P-51B-15-NA of the 334th Fighter Squadron, 4th Fighter Group, serving in the UK with the Eighth Air Force. 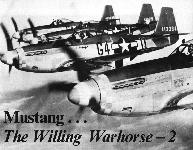 On test in the UK as TK589, this P-51D-5-NA was transferred from the USAAF for evaluation; its original USAAF serial, 44-13332, has been only partially removed.

Serving with No 112 Squadron, RAF, in Italy in 1945, these Mustang IVs carried the Sharkmouth marking that the same unit's Kittyhawks had displayed in the Western desert.

A TP-51D modification, with two seats in tandem beneath the standard canopy. A later batch of TP-51Ds had enlarged hoods.

Photographed in China, these P-51D-5-NTs were serving with the 529th Fighter Squadron, 311th Fighter Group.

This F-6D, converted from a P-51D-10-NA, shows the dorsal fin addition as well as the camera ports and the DF loop behind the aerial mast.

The first Rolls-Royce Mustang X conversion, with Merlin 65 installation and with the nose intake lines revised after early flight testing.

One of the other Rolls-Royce conversions of P-51s to Mustang X configuration - AM203.