Spitfire I K9987 in service with No 66 Squadron showing its pre­camera gun on the wing. This particular aircraft - unusual for its war codes; note the three-bladed propeller, “humped’' cockpit canopy and white-painted serial - crashed at Duxford on 30 September 1939.

"Спитфайр" Mk.IIA(LR) с дополнительным топливным баком под крылом, подготовленный для операции "Санрайз"
A Spitfire IIA (LR) of No 66 Squadron, one of the three units issued with this long-range variant that was specially developed for "Operation Sunrise”. The tank was carried only on the port wing.

A Spitfire II with mock-ups of overload fuel and oil tanks fitted flush under the wings.

View of the Spitfire prototype K5054 at the A&AEE Martlesham Heath in April 1936, with the original rudder and no fairings on the undercarriage legs.

Spitfire I P9386 with No 19 Squadron at Duxford in October 1940; note the "QV" code replacing “WZ” and the strengthened, tapered radio mast.

The Spitfire prototype in August 1936, showing the modified rudder with smaller horn balance and the undercarriage fairings, including full wheel covers with the lower halves hinged to the upper portions.

A later photograph of K5054 at Martlesham, showing the addition of stub fairings on the exhaust ports

Spitfire I K9793 was used at the A&AEE Martlesham Heath in 1939 for a variety of equipment trials and is shown here with a de Havilland three-bladed two-speed propeller.

Rescue packs were carried in the fuselage chutes of the Spitfire IIC.

"Двойка", переделанная в поисково-спасательный самолет Mk.IIC
Spitfire IIC P8131 of No 276 Squadron, one of the units flying this variant for air-sea rescue duties.

A cannon-armed Spitfire IIB of No 91 Squadron receives attention from armourers and fitters.

Первый "Спитфайр" с пушечным вооружением (еще без пулеметов)
The first Spitfire to carry cannon armament was this Mk 1, L1007, which was fitted with Type 331 wings in mid-1939 to mount a pair of 20-mm Hispano cannon, each with a 60-round drum-type magazine. 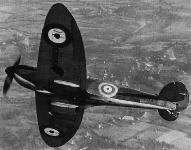 The prototype in its final form, with eight-gun armament, radio and mast, tailwheel in place of skid, and operational camouflage.

"Спитфайр" из состава 72-й эскадрильи (предвоенное фото)
A pre-war photograph of a Spitfire I in service with No 72 Squadron, showing the original "SD" codes (soon changed to "RN") and the squadron crest in an arrowhead on the fin.

Mystery surrounds the origins of Spitfire I HK856 - here photographed in Italy in 1943. It and HK854 were in the Middle East by 1941, with serial numbers assigned locally and not on production contracts. They may well have been the two Spitfire Is (P9566-9567) diverted from RAF contracts and shipped to Turkey in May 1940, assuming that they were transferred back to RAF ownership whilst en route through the Mediterranean.

Spitfire IIA P7665 of No 65 Squadron at Kirton-in-Lindsey in July 1941, soon after the unit had become one of the three "East India" squadrons as indicated by the inscription beneath the cockpit. The fairing over the Coffman cartridge starter, just behind the spinner, was a distinguishing feature of the Mk II.

Spitfire I AR212 in service with No 57 OTU in 1941, with a high-visibility yellow nose to indicate its training role.

A rare illustration of a Spitfire I of No 41 Squadron at Catterick in its pre-war "PN" codes; this was the third unit to receive Spitfires, after No 19 at Duxford and No 66. Spitfire I illustrated have the original two-bladed propeller, flat cockpit hood, "stick” type radio mast and a camera gun mounted externally on the starboard wing root.

A Spitfire I of No 19 Squadron at Duxford. Spitfire Is have the original two-bladed propeller, flat cockpit hood, "stick” type radio mast and a camera gun mounted externally on the starboard wing root.

Авария первой опытной "двойки"
One of the Spitfire Is serving as Mk II prototypes, with Merlin XII engines, after suffering an engine failure and forced landing in Somerset.