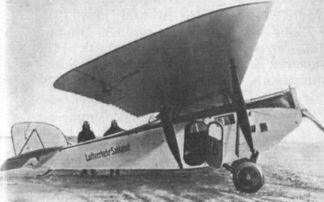 As probably the first aeroplane designed especially for commercial work, the Sablatnig occupies a position in Germany somewhat similar to that of Fritz Koolhoven's B.A.T. F.K.26 in this country. Like a good many other firms, Sablatnig commenced with a converted war machine, the Sab. P.1. This machine was a biplane of more or less orthodox wartime design, but had a conservatory roof added over the front cockpit. On this machine a flight was made from Berlin to Copenhagen and Stockholm on May 11, 1919. Like other converted war machines, the Sab. P.1 suffered from inadequate passenger accommodation, and hence it was soon decided that the type was not worth going on with. Dr. Sablatnig then set to work to design a machine which should possess such features as would make it a commercial proposition. The result was, first, the Sab. P.2, which was not, however, considered entirely suitable, and a second attempt was made, resulting in the construction of the Sab. P.3, which is the subject of the present description and illustrations.

As will be seen from the diagrams of the fuselage in side elevation and plan, the pilot is seated relatively far aft, much as in the B.A.T. F.K.26. The cockpit is a fairly large one, and has space behind the pilot for a seat for the mechanic, or, if one is not carried, for a passenger. This seat is slightly staggered in relation to that of the pilot, in order, no doubt, to provide better leg-room within a small space. In the bulkhead in front of him there is a small window. Under the pilot's feet is a small compartment for luggage, while in front of that again is the aft bulkhead of the cabin. The latter is of large proportions for the size of the machine, and has room for six passengers. These are seated, so far as can be gathered, on one long seat running lengthwise along the port side of the cabin, so that if it is desired to carry a patient he can lie full length, while there is still room in the cabin for attendants. The seat is easily removable if it should be desired to use the cabin space for goods. It is even stated that it is possible to get an aero-engine through the door of the cabin, should it become necessary to transport one in a case of urgency.
In addition to the luggage space behind the cabin, there is a small compartment just in front of the forward cabin bulkhead in which can be stored such tools as may be required for repairs or adjustments en route.

IT has already been described how the wings are quickly folded for transport or storage. In the folded condition the Sab. P.3 is so proportioned that it will just go into a German railway truck. On the other hand it might be desirable to carry a hangar on board, in case the machine should be used under conditions which precluded the use of ordinary sheds. For this purpose a small tent has been made which just fits the machine, as shown in the photographs. Owing to the fact that the leading edge of the wings is turned upwards when the wings are folded, it has been possible to avoid the necessity for any tent poles whatever, the leading edges of the two halves of the wing being strong enough to support the tent roof. This tent, which is provided with a door flap and with celluloid windows, weighs about 85 lbs. complete, and is not, therefore, a serious addition to the weight when the machine is used for special work where other accommodation is not available.
For use in winter, experiments - successful we believe - have been made with fitting the Sablatnig with skis, as illustrated in two of the accompanying photographs. This ski undercarriage is so designed as to fit on to the wheel axle instead of the wheels without entailing any other alteration than the substitution of skis for the wheels. The chassis struts and axle remain undisturbed. For use in countries where the ground is covered with snow for a considerable period of the year this undercarriage should be very serviceable.
Altogether the Sablatnig P.3 is a very interesting machine, and, it might be added, one of the few which have been passed by the Inter-Allied Commission.
Following are the main characteristics of the machine :-
Length o.a. 29 ft. 4 ins
Span 52 ft. 6 ins.
Height 10 ft. 8 ins.
Area 485 sq. ft.
Engine 200 h.p. Benz or 260 h.p. Maybach
Weight empty (Benz) 2,940 lbs.
,, ,, (Maybach) 3,080 lbs.
Useful load 1,870 lbs.
Total weight (Benz) 4,810 lbs.
,, ,, (Maybach) 4,950 lbs.
Weight per h.p. (Benz) 24 lbs.
,, ,, (Maybach) 19 lbs.
Speed 93 m.p.h.

The Sablatnig P.III of 1919 was claimed to be the first purpose-built airliner built after World War One. Nine or ten were acquired for DLH in 1926.

The Sab. P.3: Front and rear views of the machine with wings folded. In the rear view can be seen the tubular pyramid which supports the wings from the sides of the fuselage.

THE SAB. P.3: On left, putting up the tent which is carried on board; and, on right, the machine in its tent. Note the door and windows.

THE SAB. P.3: On left, carrying out the skis to the machine. Note the attachments, which fit on to the usual wheel axle. On right, the machine fitted with skis for use on snow. 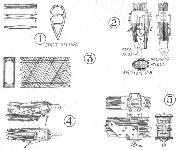 THE SAB. P.3: Some wing details. 1. Diagram showing method of building-up a wing strut, and section of the latter. 2. The unusual fitting on the ends of the wing struts. 3. Diagram of spar construction. 4. End fitting on centre-section spar. 5. Swivel lug attachment of lift struts to main spars. 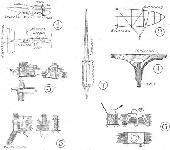