THE TAILLESS AEROPLANE
Dunne Type developed according to Modern Knowledge

The first powered Pterodactyl, bearing its military serial J8067, performs as "new type” No. 1 at the Hendon Pageant, July 7, 1926.

AS HARD TO BELIEVE AS ITS NAMESAKE: The Hill "Pterodactyl" trying its hardest, but without success, to stall.

THE BOOMERANG: Plan view, from below, of Capt. Hill's tailless'aeroplane "Pterodactyl." This view was secured with the camera pointing almost vertically upward.

The Hill "Pterodactyl" (Bristol "Cherub") The tail-less machine is no novelty, Colonel Dunne having produced aeroplanes of this type in the very earliest days of flying, but in the "Pterodactyl" Capt. G. T. R. Hill has incorporated, in addition to the "tailless" feature, the modern knowledge of aerodynamics, with the result that his machine is freed from the bugbear of aviation, "stalling," as well as possessing other important features. The tips of the backswept wings are pivoted and act as elevators and ailerons, while separate rudders project below each wing. The tailless machine appears to promise the possibility of a return to the "pusher" (i.e., engine-behind) type without loss of efficiency. 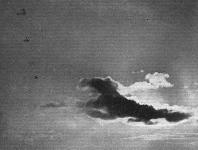 THE R.A.F. DISPLAY AT HENDON: The Seventh Display beat all previous records as regards the number of spectators (and their motor cars) present, as may be seen here.

COMING IN TO LAND: The Hill "Pterodactyl" is seen in this view in a fairly normal attitude. Note that the "controllers" are trailing, i.e., are lying alongwind, and form an angle with the main wing.

THE TAILLESS AEROPLANE: Three-quarter front view of the Hill "Pterodactyl" with Bristol "Cherub" engine at R.A.E. Farnborough. The wing tips are pivoted to form "controllers" (ailerons and elevators). The rudders are mounted under the wing, and are provided with skids.

George Button by the nose of the Hill Pterodactyl Mk.I at R.A.E. Farnborough before the first flight on 2nd November 1925
Note the fixed vertical fins above the wing.
Mk.IA

Capt., later Prof. Geoffrey T. R. Hill's Westland Pterodactyl lb, first flown in mid-June 1928, was, perhaps, the most visually pleasing of this series of tailless aircraft produced by Westland under his design leadership. A former chief test pilot for Handley Page, the Captain had devoted much of his efforts during the 1921 to 1924 period attempting to devise a safe, stall-proof aircraft. Aided by a 3-year research scholarship and subsequent support from the Royal Aircraft Establishment, Hill brought forth his first tailless glider at the end of 1924 and, built with the aid of RAE, a much improved powered version in the autumn of 1925. Hill joined Westland during the spring of 1926, where he embarked on the design of the machine shown here, which carried the Air Ministry serial J9251. This machine in its Mk. lb form was powered by a 70hp Armstrong Siddeley Genet mounted as a pusher. From the outset of flight trials with this machine it showed a marked propensity for flying along in a series of up and down oscillations rather than remaining level, a trait that may well have been aided by Hill's use of more than ample aero-isoclinic controls. In this system the wingtips swivel around the main spar to provide pitch control if used in unison, or roll control if used differentially. Top speed was 70mph.

The IB taxies past at the 1928 Hendon Display with its electroscopic rudders open.

The IC variant with tandem-wheel main unit and skids outboard.

THE LATEST "PTERODACTYL": This is the machine which it had been intended to show at the R.A.F. Display. It differs from that shown in the official Display programme in that the wheels are in tandem. The engine is an Armstrong Siddeley "Genet."

Alternative 1923 Hill tailless wing forms. Design "C" was evolved Into "D5" which had small rudders, as shown in detail drawing 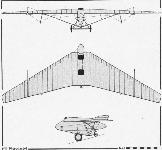 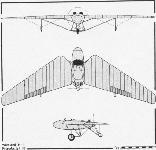