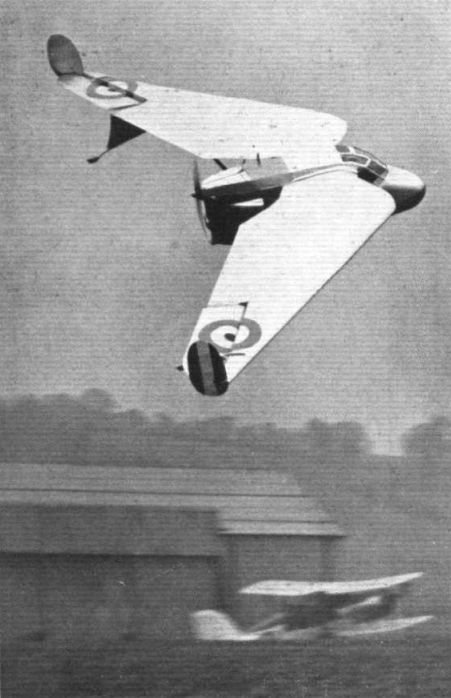 THIS machine is a development of the "Pterodactyls" shown at previous Displays. Designed by Captain G. T. R. Hill and built by the Westland Aircraft Works, the Mark IV is a three-seater ДальшеMore>>> cabin machine, fitted with the 120-h.p. "Gipsy" inverted engine.
The "Pterodactyl" has no tail, the back-swept wings giving the fore and aft stability attained in orthodox machines by means of a tail. The ailerons perform the functions of fore and aft and lateral control. Used together they act as elevators, while used in opposition they act as normal ailerons. Directional control is by the rudders on the wing tips.
The "Pterodactyl IV" has the inverted "Gipsy III" engine mounted at the back of its fuselage and driving a pusher airscrew. The gross weight is 2,000 lb. (910 kg), and the maximum speed 110 m.p.h. (177 km./h.). The endurance is 4 1/2 hr. at a cruising speed of 90 m.p.h. (145 km./h.).

THE quest for safety in the air goes on. Broadly speaking, there are, as we have previously pointed out, three ways of avoiding the spin following a stall – the "tail-first," the Cierva Autogiro, and the "tailless" aeroplane. (We are not here concerned with such spin-preventers as Handley Page slots on normal aircraft.) We have recently dealt with the Focke-Wulf "Ente" tailless machine and with the new Autogiros. This week we give a selection of photographs of the Westland-Hill "Pterodactyl," which made its first public appearance at the last Royal Air Force display at Hendon.
The "Pterodactyl" shown in the pictures is fitted with an inverted Gipsy III engine, which drives a pusher airscrew. The exhaust is taken out through the large opening in the stern, a gauze being fitted to prevent soot, etc., from getting on to the propeller blades.
Piloted by Mr. Brunton, the "Pterodactyl" has now been stunted considerably, one of the evolutions being a number of loops, all performed in a perfectly normal manner. The machine was originally designed for its non-stalling and non-spinning qualities, and the present version is a civil machine, but it would appear that the tailless feature might be very useful in a two-seater fighter if the engine were put in front and a gunner at the back.
In the pictures the "Pterodactyl" is piloted by Mr. Penrose 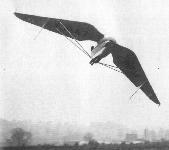 The Pterodactyl Mk IV, K1947, was initially flight-tested by L. G. Paget but development flying was continued by Penrose and F. J. Brunton. 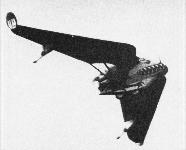 The Mk IV appeared as a "new pterror” at the 1932 Hendon Pageant.

THE NEW PTERROR: The Westland Pterodactyl (Gipsy) appeared in new colours for the purpose of monster-chasing.
The latest of the Pterodactyl series, the Mk IV, appeared in a monstrous colour scheme at the 1932 pageant.

The Pterodactyl IV in its first form, before wing-tip rudders replaced the electroscopic type originally fitted.

Westland, following upon the Pterodactyl l experience, elected to forego the Mk. II and III projected tailless fighters in favour of the more modest Mk. IV three-seater research vehicle. The sole example, K1947, first flew in June 1931 and was powered by a 120hp DH Gipsy III. The Mk. IV's maximum achievable speed in level flight was 113mph. Interestingly, in an effort to cure the roller-coaster excursions of the Mk. I, Capt. Hill reverted to using elevons on the Mk. IV, in place of swivelling wingtip, but the pitch control problems appear to have remained unaffected. 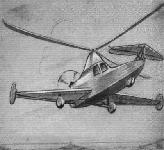 WILL IT COME TO THIS?: A FLIGHT Artist's conception of the result of combining three types which seek to avoid stalling and spinning; the Autogiro, the "Ente" and the Pterodactyl. The name might be something short and snappy, like "Pteroautogirentedactyl."