THE following brief notes regarding a new commercial aeroplane being produced by A. V. Roe & Co., Ltd., may be of interest.
The first machine in this new series of Avro commercial types is a somewhat larger aeroplane than the Avro Ten and is fitted with two geared "Jaguar" engines. Instead of making the top longerons of the fuselage continuous and attaching the wing directly thereto, A. V. Roe & Co. have adopted a modification, which was tried out very successfully in the Avro Six. At the point of attachment of the wing, the top longeron is dropped, so that the top line of the fuselage is continued in the upper surface of the wing instead of in the lower surface of the wing as before. This means that the spars pass right through the upper part of the cabin. The result of this alteration is to allow a reduction in the head resistance of the machine, while actually affording more head room for the passengers, the position of the spars in the cabin ci eating merely a momentary break in the general lofty appearance of the cabin.
In the present machine the two members of the crew will occupy a control room situated in the extreme nose of the fuselage and the flying controls will be very similar to those of the Avro Ten. Immediately behind this control room is the passengers' cabin, which is arranged on the machine at present building to accommodate sixteen passengers, with limited fuel range. It is probable that for normal commercial transport purposes the number of passengers will be reduced and the fuel range increased. The entrance door, lavatory accommodation and a rear baggage hold are all similar to the corresponding provisions made on the Avro Ten. The undercarriage, however, will be of the new Avro oleo type, in which rubber is not used at all. Either a tail wheel or a tail skid can be fitted, according to choice.
The engine mountings are attached directly to the front spar of the wing and are suitably streamlined into the aerofoil section by means of cowling and fairings. Each engine has a separate oil tank, mounted in the leading edge of the wing, and a separate fuel tank of welded aluminium, carried in a cradle between the front and rear spars of the wing.
No performance figures are yet available, but a very much better performance than that of the Avro Ten is expected.

AVRO 642 COMMERCIAL MONOPLANE
A development of the earlier Avro monoplanes, which should go a long way towards making commercial aviation a sound economical proposition

HELPING HAND: Mr. Hillman uses his Rolls-Royce as a Tractor to bring out the M. & S.A.F. Avro 642 on to the tarmac.

Large commercial type: The Avro 642, is also available as a twin-engined machine

VICEREGAL: The Star of India, an Avro 642 (four "Lynx IVc") for the Viceroy of India. It travels over 600 miles at 130 m.p.h., with six passengers and four crew. The seating and interior decoration are particularly luxurious.

A NORTHERN FERRY: The Avro 18, which has already been described in FLIGHT for September 21, is now nearing completion at Manchester. Our view shows the nose of the machine and gives a good idea of the large amount of space in the cabin. It is being built for Midland & Scottish Air Ferries, Ltd. 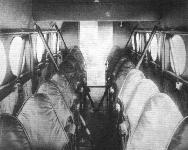 For the new Avro four-engined monoplane specially built for the Viceroy of India, complete Marconi equipment was selected. This is the combined medium and short wave transmitting and receiving apparatus, Type A.D. 37/38, with Marconi "homing" device, as adopted by Imperial Airways for their "Atalanta" class aeroplanes operating on the Indian and African air routes, and by Qantas Empire Airways, South African Airways, and Lineas Aereas Postales Espanolas.

Side elevation of the new Avro Commercial monoplane.