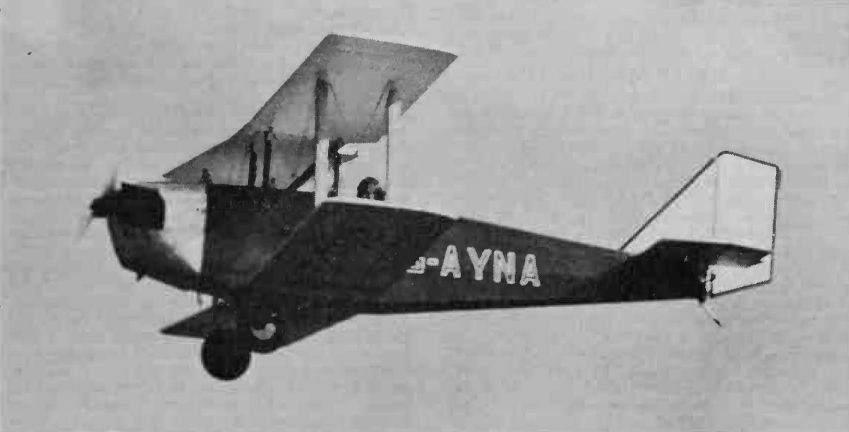 A CURRENT topic of conversation in club flying circles is "that little biplane built by the Lympne G.E." The G.E. concerned is Mr. Currie and his aeroplane has been tentatively ДальшеMore>>> christened The Wot.
The little single-seater biplane is of simple construction and is built of spruce and plywood with mild steel fittings throughout..
The fuselage has four spruce longerons and cross-members with plywood sides and decking. There are three stiffening plywood bulkheads and a fireproof bulkhead. A locker is incorporated in the top decking behind the pilot.
Two solid rectangular spruce spars are used for each wing, and there are three bays of wooden bracing. Eleven main ribs and nine nose ribs are used with a plywood leading edge and spruce trailing edge and tip. The interplane struts are of spruce. Two landing wires, two flying wires and two interplane strut cross-bracing wires figure in each pair of wings. The centre section consists of six faired, mild-steel tubular struts braced by two pairs of wires.
Situated in the fuselage between the pilot and engine is a six-gallon tank. There is plenty of room for additional tankage.
Controls are of orthodox design and include differential ailerons. The differential action is in a small box under the pilot's seat.
The undercarriage consists of two pairs of faired tubular legs to the bottom of which are welded two horizontal tubes. This structure is braced by a pair of wires.
The streamline axle is held by "bungee" cord. Low-pressure tyres are used.
The engine - a J.A.P. flat twin of 36 h.p. - is mounted on mild-steel-tube bearers which are, in turn, mounted on rubber to absorb vibration
Data are: Span 22ft. 1in., length 18ft. 2in., height 6ft. 9in., weight empty 405 lb., weight loaded 575 lb., top speed 75-80 m.p.h., cruising speed 65 m.p.h., stalling speed 35 m.p.h.

DURING the past few months an interesting little single-seater, appropriately called the Wot, has been flying around Lympne. This was designed by the chief ground engineer of the Cinque Ports Club and built by him with assistance from other members of the ground staff. In its present form it is powered by a 40 h.p. flat twin J.A.P., and until an in-line engine is available it is not likely that any further examples will be built. Nevertheless, it is educative as the first example of what is virtually a scaled-down version of the conventional training biplane, and it might, with necessary modifications to the controls which are now being carried out, be very suitable for solo work by novice pilots who have been brought up on the aforementioned conventional types.

Currie Wot 2 G-AFDS was built in 1937 by Cinque Ports Aviation Ltd at Lympne and was destroyed there during an air raid in May 1940.

A Greek enigma; while Lowe-Wylde was in Greece he commissioned Blackburn to build an aeroplane for him, and this diminutive single-seat single-bay biplane of approximately 21ft (6-4m)-span may have been the result. Its identity remains uncertain as it it bears no markings, the Greek civil register not beginning until 1934.

At the end of the First World War Greece took delivery of 42 Airco (de Havilland) D.H.9 bombers, powered by 230 h.p. BHP engines, which were used mainly by the naval air force during the Asia Minor campaign and were subsequently transferred to Tatoi airfield and the Phaleron naval base. The KEA reconditioned a number of these and at least six were modified into seaplanes in 1926, the first such machine being N.A.97. The pristine reconditioned D.H.9 with its new float undercarriage seen here is N.A.101, which was test-flown from Phaleron Bay in May 1927. Beside the D.H.9 is the sporting biplane possibly built for Lowe-Wylde. Similar in size and configuration to the later Currie Wot, it has a closely-cowled horizontally-opposed two-cylinder air-cooled engine, which turned an extremely small two-bladed wooden propeller. The wings are unstaggered, with full-span ailerons on the lower wing only. Any further info on this machine to the Editor, please!