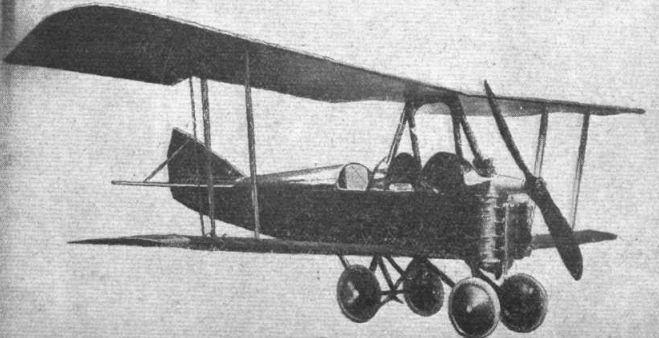 This firm is a newcomer into the aviation industry, as far as pre-War aviation is concerned. It is one of the firms which had not turned their attention to aeroplane construction until the War demand arose. It will, therefore, be of some interest to watch the future of the firm. At the Paris Show they are exhibiting two machines, one a passenger 'bus to carry four, and the other a little spotting two-seater.
<...>
The sporting biplane is a small machine of 26 ft. 3 ins. span and 19 ft. overall length. It is designed as a two-seater, and is built to a large extent of Duralumin. Owing to the peculiar arrangement of the engine (see accompanying silhouette) the fuselage has been placed very low, giving a sturdy undercarriage structure which with its four wheels, in conjunction with a low landing speed, practically precludes the possibility of damage except during an extremely bad landing. The landing speed is stated to be below 25 m.p.h., but, as in the case of the Farman sporting machine, this sounds a little optimistic, in view of the fact that the wing loading is about 4.5 lbs./sq. ft. Probably the landing speed is nearer 35 m.p.h. The undercarriage is provided with a sprag operated from the pilot's seat, by means of which the machine may be pulled up quickly after touching the ground.
Not the least interesting feature of this machine is its engine - a Henry Potez type A 4 - of 50 h.p. It is placed vertically in the machine, with the cylinder heads pointing forward so as to ensure even cooling. (The engine is aircooled.) At the upper end of the vertical crankshaft is a bevel gear which serves the double purpose of transmitting the power to the horizontal propeller-shaft and of giving a 2 to 1 gear reduction. The weight of the engine is somewhat great for its power, compared with modern aero engines, but it is stated by the makers that reliability has been their first consideration, and that they consider this of greater importance than low weight. The engine weighs 220 lbs., or slightly over 4 lbs ./h.p., but it is claimed to be as reliable as a car engine, and to require very little attention. The bore is 100 mm. and the stroke 120 mm., and the full power of 50 h.p. is developed at a speed of 2,200 r.p.m., which give an airscrew speed of 1,100 r.p.m.

The second Potez machine, the type VIII, on the other hand, has several unusual features. First of all, it is constructed to a large extent of metal (duralumin) as regards its wing structure. The fuselage is, however, built of wooden longerons and struts, covered with three-ply. Secondly, the mounting of the engine is very unusual, the crankshaft being placed vertical and driving the airscrew shaft through bevel reduction gearing. This results in a very low position of the fuselage while retaining the usual position of the centre of thrust. The consequence is that the body is very easy to get into and out of, while the height of the undercarriage struts is reduced to a minimum. The design also encourages the use of a four-wheeled undercarriage, as the nose is very low over the ground, and such a type of chassis has, in fact, been employed. The main wheels are placed farther aft than usual, behind the centre of gravity , so that even when the machine is alighting at the angle of maximum lift there is only a small load on the tail skid, and consequently the fuselage is not subjected to such severe shocks as in the case of machines with their wheels in front of the centre of gravity. The front wheels, placed as they are immediately under the engine, effectively prevent the machine from turning over on her nose, and in actual use will probably be found to save many a propeller, to say nothing of worse damage.
The 50 h.p. Potez engine is of the four-cylindered vertical type, air-cooled, and is, as already mentioned, placed with its crankshaft vertical. By this means it is hoped to ensure even cooling of the cylinders. From the point of view of running this arrangement of the engine would appear to be very good, as not only is the engine lower over the ground, but also all the different parts which may require attention are easily accessible, as will be seen from the accompanying illustrations. Also from the pilot's point of view this arrangement of the engine is excellent. As the nose of the fuselage is low, and is furthermore very narrow, the engine and its housing interferes with the view to a very small extent only. Taking it all round, there appears to be a number of not inconsiderable advantages in arranging the engine as in the H. Potez Type VIII.
The wing construction is the part which we like least. It is entirely in duralumin, which fact in itself will be against the machine owing to the expense, the cost of duralumin being several times that of steel. Further, the design is not what one would expect in a modern machine. The wing spars are of plain channel section, which is not an economic form of construction, it being impossible to develop the full strength of the material. The rib construction also impresses one as being weak, although it is probably better than the spars.
Ailerons are fitted to top plane only. They are operated by horizontal tubes inside bottom plane, attached to L-cranks at the foot of the rear inter-plane struts. From these cranks tubes run up to the ailerons in the top plane. The inter-plane struts themselves are of duralumin, streamlined, and the attachment is very simple, as shown in one of our sketches. Altogether there are many excellent points about the Potez Type VIII, although certain points are open to criticism, and we trust that this newcomer to the aviation world has come to stay.

M. HENRY. POTEZ - who is, it appears, the only foreign exhibitor in the full-sized aeroplane section - is showing the small, and interesting, 50 h.p. Sporting biplane, which attracted no small amount of attention at the Paris Salon last year. Inasmuch as we fully described this machine, in connection with the Paris Show, in FLIGHT for Jan. 15 last, it is only necessary at the moment to but briefly outline the general characteristics. It is a fuselage tractor biplane in the construction of which duralumin plays an important part. Its most prominent feature consists of the arrangement of the engine, a 50 h.p. 4-cyl. air-cooled Potez. This is mounted in the nose of the fuselage with the crankshaft in a vertical position and with the cylinder heads foremost. This allows the fuselage to be placed as low as possible whilst the airscrew, which is driven through bevel reduction gear, is located with its line of thrust normal. Another advantage in this arrangement consists of the exceptional accessibility of the power plant. The fuselage is built up of wooden longerons and struts, covered with three-ply, and is carried on a sturdy four-wheeled landing chassis. The main planes are built entirety of duralumin, the spars being of channel section. Ailerons are fitted to the top plane only, and are positively operated through horizontal tubes passing through the lower plane, and vertical connecting struts and L-cranks. The inter-plane struts, of which there are two each side, in addition to the inverted V-type central cabane, are of streamlined duralumin tubes. Both planes are set at a dihedral angle and are without stagger or sweepback, but have a rather large gap.
The pilot and passenger are seated in tandem, in separate cockpits, the passenger occupying the front one, over the centre of gravity of machine. Both pilot and passenger have a very good range of vision.

<...>
At one of the Paris Aero Shows, a small Potez two-seater was shown which incorporated several interesting features, notably as regards its engine, a 50 h.p. Potez, which was placed on end, with its four cylinders pointing forward. Nothing came of the idea, it appears as nothing more has been heard of it, but the arrangement had a good many points to recommend it. Apart from the engine, which entailed a rather unusual installation, the sporting two-seater exhibited recently may be said to be descended from that earlier type, but the power plant is a 70 h.p. Anzani. Known as the type VIII, this machine is of composite construction, with ply-wood covered wood frame fuselage and Duralumin wing skeleton and inter-plane struts. The type VIII is of very orthodox design, and is just a plain straightforward machine, in which pilot and passenger, or pupil, sit tandem fashion, the two cockpits being almost one, by the fact that the coaming does not extend across the top. The machine is fitted with dual controls, being particularly suitable for school work.
The main characteristics are: Length o.a., 5-72 m. (18 ft. 9 ins.); span, 8 m. (26 ft. 3 ins.); wing area, 20 sq. m. (215 sq. ft.); weight empty, 240 kg. (530 lbs.); weight of fuel 40 kg. (88 lbs.); useful load, 190 kg. (418 lbs.); total loaded weight, 470 kg. (1,036 lbs.); power loading, 14-8 lb./h.p.; wing loading, 4-8 lb./sq. ft.; speed near ground, 142 km. (88 m.p.h,.); climb to 3,000 ft. in 4 mins.; ceiling, 4,000 m. (13,100 ft.).

The Henry Potez type VIII: This machine has its engine mounted with the crank-shaft vertical, and the drive to the propeller is through a bevel reduction gear

THE HENRY POTEZ TYPE VIII: Close-up view of the engine, a Henry Potez four-cylindered aircooled. This engine is placed in the machine with its crankshaft vertical. Note the accessibility of all engine parts and accessories

Henry Potez Sports Model: This machine is fitted with a 70 h.p. Anzani engine, and carries pilot and one passenger. 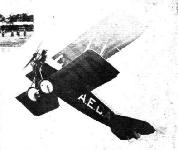 MACHINE IN THE GET-OFF COMPETITION: Douchy "lifts" his Henry Potez into the air

The Henry Potez Type VIII School Machine: The engine is a 70 h.p. Anzani. 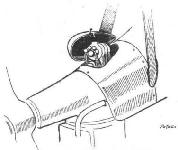 THE HENRY POTEZ TYPE VIII: Sketch showing neat cover over magneto. The engine is placed with its crankshaft vertical 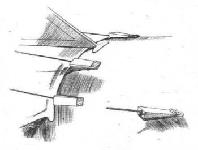 The fibre block cable guides on the Potez VIII are provided with a hinged metal protector.

THE HENRY POTEZ, TYPE VIII: This machine has a 50 h.p. Potez engine