Two-seat flying-boat trainer of 1918 powered by a 74.5 kW (100 hp) Curtiss OXX-6 engine in pusher configuration. Fifty delivered to the US Navy before the end of World War I. Could also be fitted with skis. The Type 40 was also used for carrying airmail. Max level speed 290 km/h (180 mph).

IF the Aeromarine Plane and Motor Co., of Keyport, N.J., was kept busy producing aircraft and aero engines during the War, the arrival of peace would appear to have made little difference in the activities of this firm - except that their output is now for peaceful purposes. With the experience gained in the manufacture of 300 naval seaplanes and flying boats, the engineers of the company, Charles F. Willard and Paul G. Zimmermann, have made considerable progress in the theoretical and. practical work of the past 16 months, resulting in the creation of several new types of commercial and sporting flying boats. One of these machines, the 50 B-2 "Limousine" flying boat, was exhibited at the New York Aero Show, when it created considerable interest, and we are able this week to give a few particulars and an illustration of this machine.
The aeromarine limousine is a three-seater pusher flying boat with a speed of 75 m.p.h. The pilot sits in front, with the two passengers seated side by side immediately behind. Over all three is built up a cabin, the roof of which rises in a graceful streamline curve. It is built as part of the hull, and consists of transparent celluloid sheets set in strong frames, giving an unobstructed view.
The cabin is handsomely finished in blue leather and polished mahogany, giving one the impression of being in a beautiful sedan. The upholstery, the furnishings, the compartments and draws lining the sides of the cabin, and the numerous little comforts provided, all go to make the aerial tourist feel that in changing over from the road to the air he has gained not only speed and novel ever-changing scenery, but luxury and comfort as well. Access to the cabin is by means of wide watertight doors.
One feature of the aeromarine limousine calling for special attention is the elimination of the usual array of control wires and pulleys, etc., from around the control column and rudder bar. A special invention of the Aeromarine Co. renders this possible, the ailerons being operated from the control wheel by a single tube, whilst the rudder bar communicates its motion to a duplicate bar beneath the floor. This arrangement not only makes for neatness, but prevents the risk of coats or other articles jamming the controls.
The engine installed is an eight-cylindered V, developing 150 h.p., built in the Aeromarine factory and known as the B-8. It is mounted between the wings some distance behind the cabin, and drives direct a pusher air screw. A self-starter is fitted, and a windmill pump forces petrol from the main tank, located in the hull behind the cabin, to a small service tank in the top plane.
For those who prefer to be snug inside a cabin in winter or bad weather and out in the air when summer breezes blow, the Aeromarine Co. has devised another "ship" which may best be described by calling it the touring car of the air. In this type the pilot sits alone in a cockpit in the bow of the boat. In a larger opening behind him two passengers sit side by side. They are protected, like the pilot, by a windshield, but the cockpit may at any time be completely enclosed and made proof against wind and water by the use of a removable celluloid top. This plane, too, is most carefully finished as well as most carefully constructed. There is no roughness or crudity such as marked the first planes. An electric self-starter is also used on this model.
The principal characteristics of the Aeromarine 50 B-2 are as follows :-
Span (top) 48 ft. 6 ins.
Span (lower) 37 ft. 8 ins.
Chord (both) 6 ft. 3 ins.
Gap 6 ft. 6 ins.
Stagger 1 ft.
Dihedral angle 176°
Angle of incidence (top) 4° 20'
Angle of incidence (lower) 3°
Decalage 1° 30'
Wing section R.A.F. 6.
Overall length 28 ft. 11 3/16 ins.
Overall height 12 ft. 7 ins.
Area, top plane 304 sq. ft.
Area, lower plane 200 sq. ft.
Area, ailerons (two) 58 sq. ft.
Area, elevators (two) 25 sq. ft.
Area, tail plane 39 sq. ft.
Area, rudder 17-5 sq.ft.
Area, fin 15 sq.ft.
Weight fully loaded 3,225 lbs.
Useful load 245 lbs.
Loading per h.p. 23-8 lbs.
Loading per sq. ft. 6-15 lbs.
Speed range 44-75 m.p.h.
Climb in 10 mins. 2,200 ft.
Range of action 3 1/2 hours, or 250 miles. 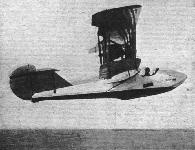 An "Aeromarine" type 40-c. flying boat in flight, after taking off from the frozen surface of Raritan Bay, N.J.