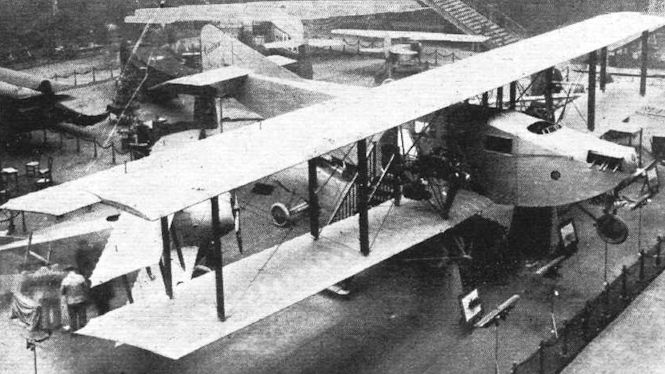 No firm has a greater number of machines on view than the Caudron, six complete machines being shown, ranging from the old G.3 with skids and open tail girder to the three-engined passenger carrier, C.61. The G.3 is too well known to need any description here. Suffice it to state that it forms the first step in a carefully-graded course of instruction. From the G.3 the pupil goes on to the second school machine shown, the C.27, which is a two-seater tractor biplane with 80 h.p. le Rhone engine. Finally he is transferred to the C.59, a two-seater tractor biplane with 180 h.p. Hispano engine. There is nothing of special interest in either of these machines, which are plain, straightforward biplanes of usual design and construction.
<...>
The three-engined C.61 is in the main similar to that shown last year, but certain improvements have been incorporated, chief of which is the placing of the petrol tanks in the top plane instead of under the passengers' seats, where their presence would have been a constant source of danger.
The cabin of the C.61 accommodates eight passengers, and it is of interest to note that the lower portion of the fuselage is formed into a series (11) of watertight compartments sufficient to keep the machine afloat in case of a forced descent on the sea. Several of these machines have been bought by M. Latecoere for the Marseille-Casablanca route, which entails crossing the Mediterranean. As a matter of fact, with three engines, any two of which are capable of keeping the machine aloft, the chances of a forced landing on the sea should be very remote. Incidentally, it is not without interest to mention that, in addition to the six Caudron C.61 machines ordered by Latecoere, two more were purchased on December 19 by another firm. We wonder if any other firm can show similar results.

<...>
The only other new machine on view, and of that only the front portion of the fuselage is shown, is the Caudron C.81, a very large three-engined cabin machine. It may be remembered that this is a type which has long been a favourite with the Caudron firm, having been produced in various sizes and with different power plants. In view of the fact that we on this side of the Channel are now beginning to turn our attention to the three-engined machine, it is of interest to remember that M. Caudron can probably claim the distinction of having first introduced the type in the form in which it is now generally employed, i.e., with one engine in the nose of the fuselage and one on each side on the lower plane. The C.81 is provided with a very large saloon, and a large placard on the stand announces that the machine flew, in November of this year, from Paris to Moscow with landings at the following towns: Strasburg, Prague, Warsaw, Vilna, Minsk, and Smolensk.

The three-engined Caudron has the pilot's seat in front of the cabin.

The Caudron three-engined machine, photographed from the gallery.

This photograph does not show the grand staircase, but illustrates the large cabin exhibited on the Caudron stand. This machine has flown from Paris to Moscow.

A peep into the cabin of the Caudron three-engined machine.

THE CAUDRON UNDERCARRIAGE: One of the skid undercarriages of the "C.61." Note the arrangement for giving equal tension in the various rubber cords, and the skid below, which protects the rubber against wear.