THE already large number of medium-light and ultra-light machines which are either in the design or the prototype stage has recently been increased by one - the product of the Chrislea Aircraft Co., Ltd., of 61, Goldney ДальшеMore>>> Road, London W.9.
This machine, which is in process of construction, is a side-by-side two-seater low-wing monoplane on fairly conventional lines, with simple, manually operated half-span flaps and fold­ing wings. The undercarriage, which is of the cantilever type, is attached to the front spar of the stub wing and the shock is taken by compression rubbers. The machine is mainly of spruce and plywood construction, with welded steel for such parts as the engine mounting and undercarriage attachments. It is stressed for aerobatics and is primarily designed for club and private-owner use. The price has not yet been settled, but in the word of tire designer this will be "attractive."
The engine to be fitted is the Walter Mikron Mark II of 62 h.p., and the Chrislea Aircraft Co., Ltd., tell us that they have obtained the sole rights for the manufacture and distribution both of this engine and of the Mark I model.
The provisional specification of the Chrislea monoplane is as follows: Weight empty, 640 lb.; all-up weight, 1,125 lb., maximum speed, 118 m.p.h.; cruising speed, 110 m.p.h.; land­ing speed (flaps down) 36 m.p.h.; rate of climb, 650 ft./min., and range 450 miles.

FOR the C.A.G.
The Chrislea Monoplane Described

SINCE the announcement of the Civil Air Guard scheme many problems have faced the clubs, chief among them being that of providing suitable training aircraft. It almost seems that the designer of the Chrislea Airguard might have had this very point in mind when he first drafted out his ideas many months before any hint of C.A.G. was even whispered in the dovecotes of Kingsway, for from many viewpoints the Airguard is a most suitable aeroplane for the purpose.
From the outset, Messrs. R. C. Christoforides and B. V. Leak manfully attacked the problem of evolving a small-engined machine which should be simple and accessible, while at the same time having the comfort and robustness of an aeroplane with double the engine capacity - all this to be achieved without noticeable sacrifice of performance. The result now waits at Heston, where it is practically ready for the Farnborough and Martlesham tests.
As a prototype the Airguard is most interesting. Briefly, it is a side-by-side low-wing cantilever cabin monoplane, powered by a Walter Mikron II 62 h.p. four-in-line inverted engine. The fuselage is of torsion-box construction from the tail to the rear of the cockpit. It has four spruce longerons, the whole being ply-covered, with vertical spruce stiffeners. For the cockpit the two top longerons are carried on and “broken” to drop several inches, so that the view out of the cabin is considerably enhanced. The decking of the fuselage is a separate component, and may be regarded as a fairing for the cockpit. It is of light ply construction.
The cabin gives ample accommodation for two people and provides an excellent view both forward and downwards. The two side windows are so placed that it is a simple matter to look not only out but also back without having to crane one’s neck, while a “skylight” is also provided. Behind the seats is a locker for baggage up to 40 lb.
Controls are simple. A central stick is fitted, with a low-geared tail trimmer. The rudder is operated by dual pedals, one pair of which is detachable. The control system is operated by cable and rod, with no pulleys in cither the aileron or elevator controls.
The wing is assembled in three sections or, to be more accurate, five, if the detachable wing tips are regarded as individual units. The centre-section is built up round two parallel spruce box spars, which rest on top of the bottom longerons and are cleated to the vertical members of the cockpit walls. High-tensile steel plates with dural bolts provide a basis for the attachment of the wings and also the mounting for the undercarriage. In future models a universal joint will be fitted on the rear spar roots so that the wings can be pulled back and turned vertically before swinging them back to rest on the tailplane.

The wings are of Clark Y section and have box spars with stiffening diaphragms at frequent intervals. The spars taper both in plan and thickness to the tips. Ply-wood ribs with light vertical stiffeners are used, and the whole wing is ply-covered. Two plates with two bolts apiece secure each wing tip to the main spars.
Simple three-position manually operated flaps are fitted on each side of the fuselage and extend out to the ailerons.
The tail consists of two solid spruce spars, ribbed as in the wing and ply-covered. The tailplane is built in two halves and linked by two dural plates which extend down the bulkhead of the fuselage. The elevators are inter connected with a steel torque tube with central lever. A steel quadropod, of tubular construction and bolted to the top longerons, forms the base for the tail fin.
The undercarriage is of the simple half-fork type, employing eight rubber buffers under compression. The rebound is taken on one buffer, with a split fibre bush bearing on a conical shoulder to serve as a check. The leg, attached to the piston, is keyed in two places. An interesting feature of the undercarriage is that one leg can be detached from the main spar and replaced in less than thirty minutes, by the removal and subsequent re-insertion of two spar bolts.
Finally, the Walter Mikron engine is carried on a fully braced mounting which obviates crankcase stresses.
On its initial tests, it is stated, the Airguard attained a service ceiling of 15,000ft., fully loaded. Its maximum cruising speed was 110 m.p.h., with a safe range of 375 miles. The span is 36ft., the overall length 21ft. 6in., and the height, 6ft. 3m. With flaps, it is claimed, the Chrislea can be landed at 40 m.p.h. The price of the machine, delivered at the Chrislea Aircraft Co., Ltd., Heston, is £550.

A NEW type to be considered as being particularly suited to C.A.G. requirements is the Chrislea, which is a side-by-side two-seater cabin low-wing monoplane. It was, however, designed, and the work of building the prototype had been started, before the details of the cheaper flying scheme had become public property.
Although, with the excellent view provided for both occupants and the normal flying characteristics which the initial test flights have shown, the Chrislea should make a good trainer, it was designed primarily to interest those private owners who require a good performance, comfort and reasonable roominess at economical first and later costs. The engine is a Walter Mikron II and this, it is expected, will be shortly put into production by an associated company.
The machine, which is known as the Airguard, has a number of interesting structural features. One of these invokes an ingenious wing-folding arrangement in which a universal joint is fitted to the rear spar roots so that the wings can be pulled back and turned vertically before they are swung against the fuselage. In order to provide a good all-round view, the two top longerons of the box-type fuselage are dropped several inches at the rear of the cabin to give a low waistline where this is most necessary. The result, is that the occupants appear to sit very high up behind a deep screen, and even on the ground it is possible for either occupant to see out on both sides. Manually operated three-position flaps are fitted on each side of the fuselage and extend out to the ailerons. The undercarriage is of the simple half-fork-type, compression being taken by eight rubber buffers, and it is claimed that either of these legs can be detached from the main spar and replaced in less than half an hour. There are dual rudder pedals and a centrally disposed control column.
Complete load and performance figures are not yet available, but the machine is to be sold for /550.
Makers:- Chrislea Aircraft Co., Ltd., Heston Airport, Middlesex. (Hounslow 2345.)

Designed to meet the specifications issued by the Civil Air Guard for a cheap and simple aircraft with which to train civilian reserve pilots, the cunningly named Chrislea LC.1 Airguard was completed in the late summer of 1938 and registered G-AFIN. Its foreign engine precluded its selection and only one was built.

Sporting its dapper undercarriage fairings, or “spats”, and its final dashing pale blue and white colour scheme, the sole Airguard awaits another flight from Heston. It appears that the aircraft was never evaluated by the Air Ministry for Civil Air Guard service, possibly owing to its foreign engine, but also perhaps because of the perception that its neutral stability may have limited its value as a military trainer.

OUT AND ABOUT: The Chrislea monoplane has now done quite a lot of test flying in the hands of Mr. Dawson Paul and appears to be well up to expectations in general performance. This machine is a side-by-side seater cabin monoplane with a Mikron engine (for which, incidentally, the Chrislea people are licensees) and every effort has been made in it to produce a machine possessing a good view and safe flying characteristics with a normally conventional layout.

By means of ply-covered balsa, the fuselage is faired off to the extremity of the rudder.

The Airguard makes a low pass sans spats, which were found to clog up with mud and debris and were often removed. The undercarriage was of a simple half-fork type and employed eight rubber buffers under compression. The rebound was taken on one buffer with a split fibre bush bearing on a conical shoulder to serve as a check. Reportedly, the under­carriage legs could be replaced in less than 30min. 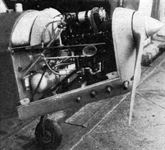 A fully braced mounting is provided for the Waiter Mikron engine. Normal crankcase stresses are avoided. 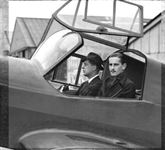 Test pilot Frank Dawson Paul (nearest camera) and Chrislea co-founder Richard Christoforides demonstrate the roomy cabin of the Airguard at Heston in September 1938. Presumably this may have been the closest the latter got to experiencing the aircraft in its element, as he suffered from a fear of flying. Note how in the construction of the cockpit the two top fuselage longerons were carried on and “broken” to drop several inches to enhance the view from the cockpit, a primary aim of the design. 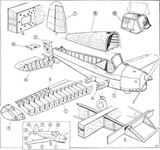 This “exploded” drawing of the Chrislea Airguard, and the accompanying key, shows the simplicity and robustness of its construction. The drawing indicates how many of the units can be quickly detached and replaced.

The layout of the Chrislea side-by-side two-seater.