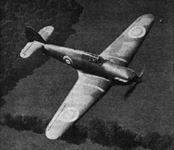 A Hawker Hurricane eight-gun fighter of the type being supplied to the South African Air Force. Many squadrons of the R.A.F. are of course, equipped with this type.

Sir Kingsley Wood, with civic officials, inspects the Spitfire at the opening of the Glasgow Aircraft Exhibition. The Hurricane can be seen in the background.

King Ghazi I in front of a Savoia Marchetti S.M.79 lately delivered to the Royal Iraq Air Force. On his left is Prince Talal.

Sir Kingsley Wood, with civic officials, inspects the Spitfire at the opening of the Glasgow Aircraft Exhibition. The Hurricane can be seen in the background. 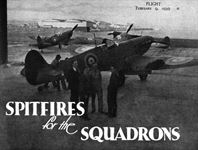 The power and the pilot: F/O. Quill about to pronounce judgment on another Spitfire.

Some further impressions captured by Flight's photographer at Eastleigh.

Моторы "Мерлин" II, готовые для установки на "Спитфайры"
A telling glimpse in one of the assembly shops, with a row of Spitfires in the background, and waiting Merlin II engines in the foreground.

Mr. A. H. Mitchell, chief A.I.D. inspector, handing over a Spitfire - with its “credentials” - to a Service pilot who has come to collect it for his Squadron.

Alvis Leonides flight-tested in a Bulldog

A number of specially equipped Bristol Blenheims are being built in Canada for the R.C.A.F. They are likely to resemble the “long-nosed” version depicted above.

The Boulton Paul Defiant is our new standard two-seater fighter. It has a Merlin engine and a multi-gun powered turret

FORMIDABLE DEFIANCE: A revealing view of the Boulton Paul Defiant, our new standard two-seater single-engined fighter. It has a multi-gun power-driven turret and a Rolls-Royce Merlin engine. 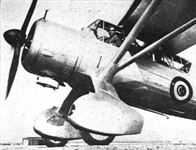 One of the Westland Lysander army co-operation machines (Bristol Mercury XII) supplied to Egypt. The air cleaner beneath the engine is an item of special equipment.

A pleasant impression of one of the new Airspeed Oxfords acquired by the Royal New Zealand Air Force.

A Northrop Delta - one of two built by the Canadian-Vickers concern for general-purpose work.

TWIN-ENGINED DIVE BOMBER: A Fokker G.I (Fauchear) of the type which is to be built under licence by the Danish Government. It has two Bristol Mercuries and special flaps under the wings for limiting speed to about 300 m.p.h. in a bombing dive. During a 3,000-foot dive it can do a 180 deg. aileron turn. In this photograph the flaps are down; when raised they are merely turned edge on, and do not retract flush with the wing. The machine, incidentally, is not balancing on its wheels; a tail trestle has been “liquidated.”

A Vickers Wellington long-range bomber of the type adopted by the R.N.Z.A.F.

A Hawker Audax of the Egyptian Air Force. This version is fitted with a Siddeley Panther X two-row engine.

S.S.V.A.F. Audaxes at Mergui aerodrome, Burma. The natives squatting in the foreground are Burmese priests.

The Wapiti is receiving the attention of fitters, riggers and wireless operators. 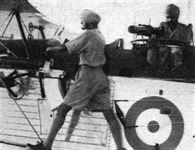 Fitter armourers of the Indian Air Force at work on a Wapiti. 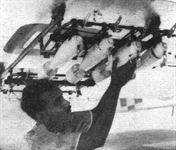 Fitting practice bombs to a Wapiti of the Indian Air Force.

A Blackburn Shark III floatplane of the Royal Canadian Air Force. This type is fitted with a Bristol Pegasus engine and cockpit enclosure.

The first of a batch of ten Supermarine Stranraers (two Pegasus X) for the Royal Canadian Air Force on the St. Lawrence River. Ten are being constructed by Canadian Vickers, Ltd. 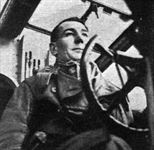 STRANRAERS AND SPITFIRES are flown with equal dexterity by Flt, Lt. A. G, Pickering, A.F.C., the Supermarine test pilot who, together with his colleague F/O. J. K. Quill, A.F.C., demonstrated the powers of the Spitfire at Eastleigh during the recent visit of Sir Kingsley Wood. Flt. Lt. Pickering is seen here “at the wheel” of a Stranraer.

One of the Noorduyn Norseman floatplanes delivered to the Royal Canadian Air Force.

One of the many Avro Ansons used by the R.A.A.F. It is seen on a clear afternoon over Sydney with the grandeur of the harbour and its superb bridge spread out below.

A take-off impression from the leading machine in an R.A.A.F. Anson squadron operating from Mascot Aerodrome, Sydney.

A production-type Skua fleet-fighter dive-bomber in a characteristic attitude.

Half a dozen Skuas (some on test, others having borne Service pilots to Brough to collect further machines) and, in the foreground, one of the Mercury-engined prototypes on a sunny morning at Brough

A Lockheed of the type adopted by the R.A.A.F. for reconnaissance and bombing operations.

ARCTIC AVRO: Belonging to the Royal Canadian Air Force, this Avro 626 with Armstrong Siddeley Cheetah V engine is one of a first batch which have been mainly built in this country and then finished off in Armstrong’s Ottawa depot. A further order for 626s, complete with skis, cockpit enclosure and louvred nose cowl is being executed.

Part of a batch of specially equipped De Havilland Tiger Moths for the Royal Canadian Air Force before delivery from the Toronto factory.

The good lines of the Flamingo may be properly appreciated when it is seen in flight. When this photograph was taken it was being flown by Mr. Geoffrey de Havilland, Junr., the company’s chief test pilot.

This somewhat unusual view of the 95 adequately shows the virtues of the high-wing type from the passengers' point of view. Above the cabin is a remote-controlled D/F loop aerial of the enclosed type, while below the fuselage can be seen the twin heated pitot-heads. 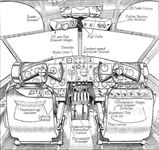 The control-cabin of the prototype D.H. 95. In production machines the controls and instruments in the roof will be mounted on a single panel, but otherwise the layout shown is substantially that which will apply to later machines. The depth of the windscreen is noteworthy; coupled with a short nose, this gives the crew an exceptionally good field of view.

How the seating is arranged in the four different versions of the D.H.95. It will be seen that only in the twenty-seater is any structural change necessary, the rear bulkhead being moved farther aft.

In this drawing the general arrangement in the long-range twelve-seater version is shown. It will be seen that freight and a certain proportion of luggage is carried under the raised floor of the pilot’s compartment. Various items of equipment, including the rear of the instrument panel, can be reached through the hinged nose.

The D.H.95 in schematic plan, elevation and frontal aspects.

Structural details of the D.H.95

STRANGE BUT LOGICAL: The G.A. Cygnet in its latest form, with twin rudders and tricycle undercarriage. In due time, of course, the forward leg will be faired; this wheel is steerable, but it may be locked in a fore-and-aft line if required. 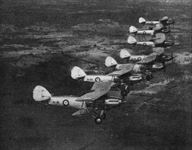 An Australian Hawker Demon (Rolls-Royce Kestrel V) as used by the R.A.A.F. for general-purpose duties.

SIR KINGSLEY WOOD looks into a Miles Master airframe on its jig during his visit to the new Phillips and Powis factory. The fuselage appears to have been modified to accommodate the new tail unit.

Sir Kingsley Wood with Mr. F. G. Miles prior to flying in a Monarch.

HENSHAW TRIUMPHANT: Alex Henshaw before the start of his Cape record attempt last week-end. Flying his little King’s-Cup-winning Percival Mew Gull (Gipsy Six R) he did Gravesend - Cape Town in 39 1/2 hours, against F/O Clouston’s 45 hours. He is due to return as we go to press, and next week we hope to deal fully with his achievement.

This photograph of the Mew Gull being refuelled at Libreville (French Equatorial Africa) on the outward journey was collected by Mr. Henshaw on the homeward flight and brought back by him to London.

The Mew Gull escorted to the Gravesend tarmac at the end of the great flight. Proud Mr. Henshaw, Senior, can just be seen behind the rudder.

THREE ARE OUT: An interesting picture (actually taken on January 25, 1939) from Seattle, showing three of the Boeing 314 boats moored together off Matthews Beach, Lake Washington. No. 1, in which interior fittings are now being installed, is on the left, while No. 3 (on the right) should, by now, have flown east for Atlantic experiments. Six of these boats have been ordered by Pan-American Airways.

K.L.M. IN THE WEST INDIES: Hato aerodrome, Curasao, with two K.L.M. Lockheed 14s and one of the Fokker F.18s which have been used by the company since the services started after the first F.18 had been flown across the South Atlantic.

One of the Airspeed Convertible Envoys two Siddeley Cheetah) supplied to the South African Government.

The Gannet is built by the Commonwealth Aircraft Corporation and is used mainly for survey. It is now fitted with Gipsy Six Ils.

K.L.M. IN THE WEST INDIES: Hato aerodrome, Curasao, with two K.L.M. Lockheed 14s and one of the Fokker F.18s which have been used by the company since the services started after the first F.18 had been flown across the South Atlantic.

The Chrislea monoplane in its finished and spatted form. This two-seater lightweight has a maximum speed of 118 m.p.h., a cruising speed of 105 m.p.h. and a range of 350 miles. The permissible disposable load of the Chrislea, which has a Walter Mikron engine, is 488 lb.

An early Aquila engine was installed in a Vickers Venom fighter. 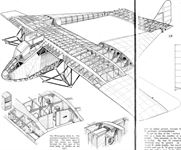 The Willoughby Delta 8. The machine is mainly of wood construction. The inner spars of the side wings are slipped through the rear spar of the front wing, as shown on the right.

General arrangement of the Delta 8.

General arrangement and sections of the Delta 9.

Scale model of the Delta 9. In each side wing is a cabin seating 18 passengers. Three liquid-cooled engines of 1,000 h.p. each are foreseen.

The Hawker Hotspur two-seater fighter has a turret of an unusual barrel-shaped design.