THE NEW CYGNET
Production Version of an All-metal Private-owner and Training Type with a Tricycle Undercarriage : Alternative Power Units

INTERESTING, particularly because it has a tricycle undercarriage, and also because it is of all-metal stressed-skin construction, the General Aircraft Cygnet is now in production as a trainer or tourer. The designer's idea has been to produce a machine which will be virtually trouble-proof, both when flying and on the ground. The Cygnet is a low-wing side-by-side seater cabin machine with twin rudders. It is fully aerobatic and can be fitted either with a Gipsy Major or Cirrus Major engine. The figures given are for the latter.

SINCE our last "Industry" number the development of the G.A. Cygnet (still Britain’s only all-metal light aircraft) has been completed. The Cygnet is a low-wing cantilever monoplane with an all-metal part-monocoque fuselage. A tricycle undercarriage and twin fins and rudders give great stability and ease of handling on the ground and in the air. Equipment includes split flaps and a special combined safety ignition switch and petrol cock. The cabin is covered by divided sliding hoods and seats two people side-by-side. A Gipsy Major or a Cirrus Major engine may be fitted.
Data (with Cirrus Major engine.) are: Top speed, 135 m.p.h.; cruising speed, 115 m.p.h.; landing range, 60-85 m.p.h.; service ceiling 14,000ft. and cruising speed 445 miles. The span is 34ft. 3 1/2 in. and the all-up weight 2,200lb.

General Aircraft GAL 42 Cygnet G-AGAX flying from Fairoaks on January 15, 1949. First registered in November 1944 and flown in camouflage as a company communications hack, 'AX was owned by R. C. Cox when this photograph was taken.

STRANGE BUT LOGICAL: The G.A. Cygnet in its latest form, with twin rudders and tricycle undercarriage. In due time, of course, the forward leg will be faired; this wheel is steerable, but it may be locked in a fore-and-aft line if required.

Mr. Hollis Williams' exposition of the tricycle Cygnet’s possibilities was one of the high spots of the afternoon.

One of the most efficient and practical light aircraft in the world - the G.A. Cygnet. 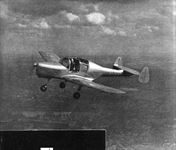 The G.A. Cygnet in its production form. Notice the way in which the roof-"half" slides back.

In this view of the production Cygnet the way in which the deeper cabin fairs into the monocoque fuselage is clearly shown, with one of the two split flaps.

A three-quarter view of the Cygnet with one door slid back on its runners. The tricycle undercarriage is now fully cantilever. A Cirrus Major engine is fitted to the first production machine which is shown here. 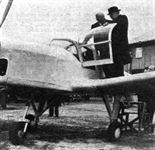 THE AIR MINISTER LOOKS IN: Sir Kingsley Wood interested in the “tricycle” Cygnet during his visit last week to the Hanworth works of General Aircraft, Ltd.; Mr. E. C. Gordon England is showing him its features. “If I had to describe this Company, I should say that it was an enterprising Company,” said Sir Kingsley. Remembering the Cygnet, the pressure-cabin experiments and the firm's extensive rearmament work, the Air Minister’s compliment is deserved.

A front view of the production Cygnet showing the good ground range of vision through the moulded screen and the increased depth of the cabin. 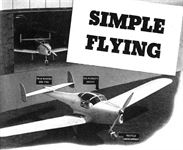 Remember your training days ... the difficulties you experienced. Judging a 3-point landing. Checking and holding off till the precise landing speed was reached. Taxying with your view obscured by the engine cowling, and trying to maintain your direction using coarse rudder. These difficulties do not exist with the Cygnet. Landing is simply a matter of gliding on to the wheels. As soon as one touches down, the aeroplane drops into a stable position on all three - and cannot bounce or fly off. Taxying is as easy as motoring, you can see directly ahead. Direction is self-maintained by twin rudders and fins, enabling the Cygnet to be flown 'feet off' at any throttle opening.

One of the aircraft considered for the fitting of a Whittle jet powerplant was the General Aircraft Ltd Cygnet II two-seat light tourer, powered by a 150 h.p. Blackburn Cirrus Major and fitted with an unusual tricycle undercarriage. This example, G-AGBN, was impressed into RAF service in July 1941 and given the serial ES915.

General Aircraft Cygnet G-AGBN/ES915 with the new hangar behind

General Aircraft Cygnet G-AGBN at Croydon in the late 1950s

This simplified cut-away drawing of the G.A. Cygnet shows the basic structure at and around the centresection. The wings, tailplane and rear fuselage are stressed-skin. The mounting of the forward undercarriage leg on the strengthened bulkhead is interesting.

The cabin layout, showing the wide entry on each side with the new sliding doors. These can be left in any position while flying - making the machine, if preferred, into an “open-air” type in hot weather.

When not in use, the seat cushions tip up so that there is no need to put muddy feet on them when entering the machine. Both seats have a sliding adjustment. 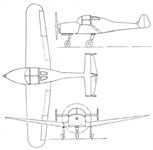