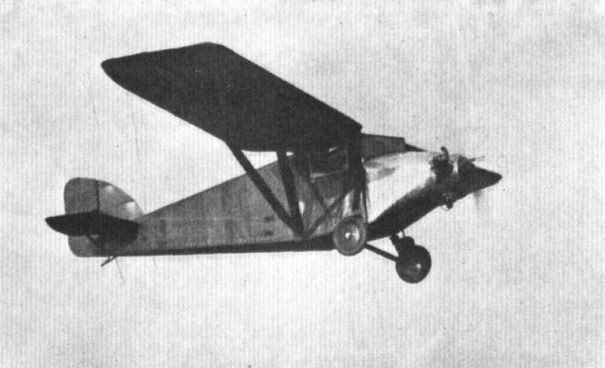 HITHERTO chiefly an aero engine firm, with two well-established engines in the 35 h.p. "Scorpion" and the 70-h.p. "Hornet," Mr. Dennis, managing director of A.B.C. Motors, Ltd., decided some months ago to enter the field of aircraft construction so as to utilise to the full the engines already produced by the firm of which he is head. He secured the services of Mr. "Tony" Fletcher as designer, and the little "Robin" to be exhibited on the stand of A.B.C. Motors is the first machine to be produced.
The "Robin" is a single-seater light monoplane of all-wood construction, and is perhaps mainly remarkable on account of its enclosed drive, or conduite interieure, being the first light single-seater of this type to be produced in Great Britain. Cabin monoplanes have, of course, been constructed before, but in the "Robin" we have this arrangement incorporated in a very small and compact machine. Opinions will doubtless differ as to the necessity or otherwise of an enclosed cabin in such a small machine, and as this is almost entirely a matter of personal taste there is little need to discuss the question here. The advantage of the enclosed arrangement is that special flying clothes are unnecessary, and it is likely also that the engine noise reaches the ears of the pilot with less distressing effect, although as we have said pilots differ in their views on this subject. It should be recollected, however, that with a cabin machine having sliding windows (as does the "Robin"), the pilot does have the option of opening the windows and thus obtaining very largely the freedom of the open type of machine.
In the "Robin" the cabin is entered through a door on the right-hand side, and although this may not always be needed, there is a hinged skylight in the roof so that with this raised it is rather easier to enter the cabin and get settled in the seat. Once the pilot has arranged everything to his satisfaction, the skylight is closed in such a manner that it cannot open accidentally while the machine is flying. The door on the starboard side, as well as the wall on the opposite side, are provided with windows, so that what with these and the skylight and the large windscreen in front, plenty of light finds its way into the cabin, which is more than one can say of some commercial passenger machines. In front of the windscreen the deck of the fuselage is dropped about a foot, and in addition the deck fairing slopes down towards the engine, thus giving a very good view forward. Aft of the cabin is a luggage compartment large enough to take two suitcases, so that the owner of a "Robin" can take with him (or her) plenty of clothes for a prolonged tour.
The "Robin" fuselage is of the "box" type with light stringers and formers, and plywood covering. The wings also are of wood construction, with spindled I-section spars and light wooden ribs, the whole fabric covered. The two halves of the wing are braced to the lower longerons of the fuselage with a pair of Vee struts on each side, and hinges are provided on the rear spar attachments to enable the wings to be folded. When this is done, the overall width of the machine is reduced to 11 ft. 8 in.
The undercarriage is of the "split" type, each wheel being supported on a tripod formed by the bent axle, the radius rod and the telescopic leg. The shock absorbers are in the form of endless rubber rings slipped over crutches, and enclosed in streamline fairings. The wheel track is wide (5 ft. 0 in.) in proportion to the span of the machine, so that there should be little tendency to "cartwheel"
The engine of the "Robin" is an A.B.C. "Scorpion" two-cylinder, flat twin air-cooled, bolted to a multi-ply engine plate in the nose of the machine. The petrol tank is housed in the deck fairing in front of the windscreen, a position which is high enough to give direct gravity feed to the carburettor.
The main dimensions and areas of the "Robin" are: Length, o.a., 17 ft. 7 in; wing span, 25 ft. 4 in.; total folded width, 11 ft. 8 in.; total wing area, 97 sq. ft.; area of ailerons, 13 sq. ft.; area of tail plane, 9 sq. ft.; area of elevators, 6 sq. ft.; area of fin, 2-5 sq. ft.; area of rudder, 4-5 sq. ft.
The tare weight of the machine is about 400 lbs., and the certificate of airworthiness covers a gross weight of 680 lbs., which will cover a fairly heavy pilot and a good deal of luggage in addition to fuel for 4 hours at a cruising speed of about 85 m.p.h. At this speed the fuel consumption is remarkably low, and is estimated to correspond to approximately 40 miles per gallon. At the moment of going to press with this week's issue of FLIGHT, actual performance figures are not available, but the estimated top speed of the "Robin" is 105 m.p.h. and the landing speed approximately 40 m.p.h.

THE Robin is the only representative of its class on the market. As a single-seater cabin machine it has an appeal to those who wish for a small machine with a reasonably high performance, but who at the same time do not wish to give up the comfort of the cabin.
Built by A.B.C. Motors, Ltd., of Walton-on-Thames, it is, as one would expect, fitted with the A.B.C. Scorpion engine.
It is one of the neatest small cabin machines at present available, and though there will' always be a division of opinion as to the desirability of a single-seater cabin machine, there must at the same time be a small circle of pilots whose flying is mainly done for business, and who travel alone, and for such as these the Robin should make an admirable machine.
It is one of the prettiest little machines we have seen, and will undoubtedly have an appeal to lady pilots; but in its present form it would seem as if it is just a little too light on the controls for anyone except an experienced pilot to handle with any degree of comfort. However, teething troubles are to be expected on any new machine, and by the time Robins are in production we may expect such things to have been modified.
The cabin is entered through a door on the starboard side, and the skylight above the cabin is made to hinge upwards, so that when getting in the pilot will have more room for his head, and when he is settled he can fasten down this skylight, which incidentally allows a clear view upwards and backwards, making the cabin feel very light and airy, eliminating any feeling of being shut in. The side windows and those in front can be slid sideways so that the pilot can always look out without looking through glass should he desire to do so.
Behind the cabin is a roomy luggage locker, which has an access door through the top of the fuselage. The fuselage is a boxed plywood structure with light internal stringers and formers so that its strength to weight ratio is high.
The wing spars are spindled I-section spruce, and the ribs are built up in the form of N-girders, with spruce of square cross-section. The wing bracing is by a pair of vee-struts on each side, and the rear hinge of the wing allows them to be folded.
The undercarriage looks somewhat diminutive, but is well designed, and has a wide track which should make the machine steady on the ground. The compression leg is made with rubber rings around steel crutches covered in a streamlined casing. 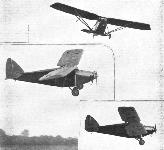 THE A.B.C. Robin is out again. The old rudder gave insufficient control, so Mr. Tony Fletcher altered the angle of the top longerons, and they now follow the incidence line of the planes straight back from the leading edge, and also, he has raised and redesigned the fin and rudder. A further small modification is the windscreen, which has been brought back so that the fuel and oil filler caps are now in front of it, and the angle of the side panes is not so acute. A very distinct family resemblance to the "Tinside F.4" can be seen when the Robin is flying, as one would expect from its designer, and the sloped off wing tips give it a dainty, almost butterfly, look. The performance is said to be well up to the estimated figures, and one was told that it was very comfortable to fly. 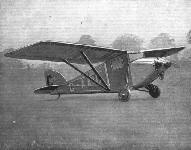 Single-seater cabin monoplane designed by A.B.C. Motors, Ltd. These machines will be constructed by Saunders-Roe, Ltd., Cowes, Isle of Wight, a large order having been placed for them by National Flying Services, Ltd. The "Robin" was exhibited at Olympia, doped with Cellon in N.F.S. colours, the fuselage being lacquered with "Cerric."

THE CAPTION to this picture showing the sole ABC Robin, G-AAID, at Heston on July 3, 1929, states that the aircraft was “made in secret at Walton-on-Thames” in Surrey. A single-seat high-wing cabin monoplane with folding wings and a plywood fuselage, it was designed by A.A. Fletcher and built by ABC Motors Ltd, who fitted it with the company’s new 40 h.p. Scorpion two-cylinder horizontally opposed aircooled engine. After its maiden flight at Brooklands in June 1929 it was shown at the Olympia Aero Show the following month. The picture shows how the windscreen had to be raised to allow access to the fuel tank filler caps; in November 1929 the windscreen was moved back so that the caps were outside the cockpit, the fin and rudder were enlarged and the fuselage lines modified. A C of A was issued on June 27, 1930, and G-AAID survived until 1932, when it was scrapped at Brooklands.

The A.B.C. Stands: In the foreground are seen the two engines, "Scorpion" and "Hornet," and behind them the little "Robin" light 'plane. 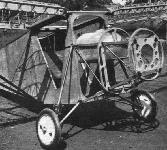 FRONT VIEW OF THE A.B.C. "ROBIN": The illustration shows in detail the engine mounting, undercarriage and cabin.

FRONT VIEW OF THE A.B.C. "ROBIN": Although showing the machine in skeleton, this photograph gives a good idea of the clean lines. 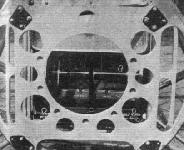 An unusual view. This photograph was "shot" through an opening in the engine plate, and shows the control stick, adjustable foot rests, control cable pulleys, etc.

The tail of the "Robin" is of orthodox construction and design.

The "Robin" undercarriage is of the "split" type, and comprises axle, radius rod and telescopic strut. The shock absorbers are endless rubber rings on "crutches." 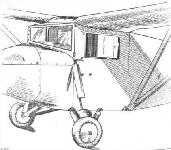 The A.B.C. "Robin" has its little enclosed cabin for the pilot and sole occupant,

ON THE A.B.C. "ROBIN": The lift strut attachment to the fuselage is shown in 1, and details of the wing construction in 2. In 3 is illustrated the attachment of the lift strut to the rear spar, and in 4 the duralumin tube across the top of the fuselage, and which carries the fork and block for the wing spar attachment.

THE A.B.C. "ROBIN": On the left, a sketch of one of the rear spar hinges, showing how aileron cables are guided. On the right, a front spar fitting, with locking pin.