The Miles Kestrel after modification as the prototype Master, N3300. Initially registered U 5 and flown for the first time on June 3, 1937, the Kestrel reappeared as N3300 in 1938. The strap visible around the rear fuselage in this photograph is part of the anti-spin parachute attachment; a release cable may be seen running forward to the cockpit.
MASTERLY: The Miles Master high-speed advanced trainer as now in large-scale production for the R.A.F. Actually, the machine seen here (with Mr. Skinner taking it up to 25,000ft. for tests), is the revised prototype with Rolls-Royce Kestrel XVI engine which gives it a top speed of 295 m.p.h. The production version will have the less powerful Kestrel XXX and will do nearly 270 m.p.h. 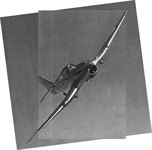 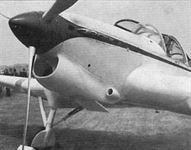 A close-up of the installation of the Rolls-Royce Kestrel XVI and the Kestrel's well-streamlined nose.

The Kestrel as U 5, with deepened radiator but before modification of the canopy.

The Kestrel with the deeper and more bulbous radiator fairing. It originally had a much sleeker but less accessible installation, with which it made its debut at the 1937 RAF Display at Hendon. Powered by a supercharged 745 h.p. Rolls-Royce Kestrel engine, U 5 had a maximum speed of 296 m.p.h. at 14,500ft - only 15 m.p.h. slower than the front-line Hawker Hurricane.

Another view of the Kestrel after modification as the Master prototype. The inverted gull wing allowed short, sturdy undercarriage legs to be used.

The Kestrel after it became the Master prototype. Comparison with the picture of the Kestrel reveals the Master's deeper aft fuselage, redesigned fin and rudder, taller windscreen and modified rear canopy.

In the transition from prototype to production Master, the radiator was moved from the chin installation seen on N3300 here to a new and distinctive position under the mainspar.

Left, the Kestrel’s rear cockpit after the first modification to raise the roof. Right, the Kestrel with the front hood and modified instructor's hood open, showing the operating handle for the hinged aft windscreen.