The Boeing 737-400 was certificated in 535 hours flown by two aircraft in six months, with Type Approval confirmed by the FAA on 2 September 1988. 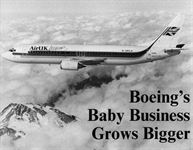 Air UK leased three -400s from GPA to allow it to become the second airline to put the latest Boeing into service.

First of the stretched Boeing 737-400s into the air, on 19 February 1988, N73700 shown here was in Boeing's house livery and bore on its forward fuselage the logos of the nine companies that had ordered the variant by that date. 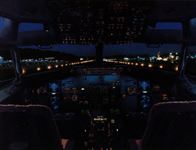 Commonality between the 737-400 and the two shorter variants, the -300 and -500, which are also now in production, is a significant setting point for Boeing and was sited, for example, by British Airways for its October 1988 decision to buy a fleet of 24 (plus 11 options) new 737s that will probably include all three versions. Flight deck commonality allows pilots with a single rating to fly all three types 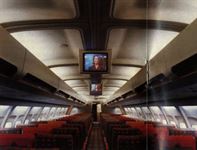 To fly within the next few months, the 737-500 (here depicted in the colours of Aer Lingus) is scheduled to enter commercial service in March 1990.