Rolled out at Palmdale on 22 November, 1988, the first Northrop B-2A (serial 82-1066) advanced technology bomber for the USAF is expected to enter flight testing early in 1989. An all-wing design developed by Northrop, with Boeing as a major subcontractor, the two-seat B-2A is powered by four General Electric F118-GE-100 turbofans of about 19,000 lb st (18 618 kgp) and is claimed to be almost invisible to defensive radars thanks to its use of stealth technology.

The A-5K Kong Yun is an upgraded version of the CNAMC Qiang-5 III, which, first flown on 17 September, 1988, has been developed by a French team under the leadership of Thomson-CSF. The A-5K is presumably in competition with the Italian-developed A-5M as the basis of a future large-scale conversion programme.

Both the industry teams competing for the US Army contract to develop and produce a new light attack helicopter (the LHX) - Boeing/Sikorsky and McDonnell Douglas Bell - received contracts valued at $158m each on 1 November 1988, allowing them to proceed to the demonstration/validation phase.

British Aerospace has provided more details of the projected Jetstream 41, a cabin mock-up of which was displayed at the meeting of the Regional Airlines Association held in Denver last November. 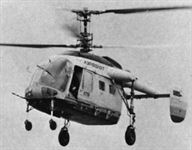 The Kamov Ka-126 programme, delayed some two years owing to non-availability of a suitable engine, has now resumed, the prototype having flown in May with a 720 shp Kopchenko TVD-100 turboshaft. The Ka-126 is fundamentally an upgraded and re-engined Ka-26 Hoodlum twin piston-engined helicopter, some 850 of which were built, including 300 for export. The majority of surviving Ka-26s are expected to he rotated through a conversion programme to Ka-126 standards, this being undertaken in Romania by ICA Brasov, with the first Romanian Ka-126 entering flight test during the course of 1989.

The prototype BO 108 twin-engined helicopter, described by MBB as a technology demonstrator, made its first flight on 15 October 1988 at Ottobrunn.