AMX of 132° Grupo, 3° Stormo 'Buscaglia' based at Villafranca in 1992. This was the second unit to receive the aircraft after 51° Stormo at Istrana. All Aeronautica Militare Italiana AMXs carry a light grey finish with low-visibility markings and codes and on the engine intake of this example is the 132 Sqn 'four cats' badge.

First Embraer-built two-seat AMX-T advanced trainer for the Forca Aerea Brasiliera. The aircraft wears a two-tone grey scheme and a tail code for 16° Grupo de Aviacao based at Santa Cruz, the first Brazilian unit to receive the AMX.

Typical attack configuration (six Mk 82 bombs and two AIM-9L Sidewinder AAMs) on an aircraft of 103° 'Gruppo', 51° 'Stormo' based at Istrana, the first unit to operate the type.

Third AMI unit with the AMX was 14° 'Gruppo' of 2° 'Stormo' which converted in the autumn of 1991 and is now also based at Istrana. This summer, 13° 'Gruppo' of 32° 'Stormo' received its first aircraft and moved to Villafranca for conversion with the SAS-AMX. When completed, the SAS will be disbanded and the training duties on the type performed by 13 °'Gruppo' at Amendola.

Comparison view of the single and two-seater AMX variants, the latter being purchased by the AMI for advanced training and maritime attack duties.

Cockpit of the AMX with the OMI/Alenia head-up display in the centre and the TV/IR and map head down display offset to the left. The aircraft is fitted with HOTAS (Hands On Throttle and Stick). 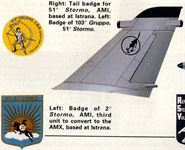 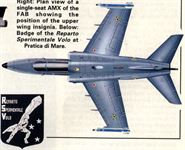 Plan view of a single-seat AMX of the FAB showing the position of the upper wing insignia.
Below: Badge of the Reparto Sperimentale Volo at Pratica di Mare.