Tests being conducted with nose-mounted Rheinmetall-Borsig powder rockets and drogue chute to achieve pinpoint landing with the DFS 230.

An early attempt to provide assault gliders with armament is seen on this DFS 230B-1 with an MG 15 mounted aft of the canopy and an MG 34 strapped to the side of the nose.

Gotha Go 242A-1s flying a re-supply mission over the Soviet Union during the summer of 1942.

A Walter RI 202b rocket slung beneath the starboard boom of a Gotha 242A-1 to assist take-of during overload trials at Rechlin in the summer of 1942.

Britain, the Soviet Union and Japan evinced interest in the possibilities of attaching lifting surfaces to armoured vehicles to permit them to be towed as gliders, the Soviet essay in the "carrier wing" field being illustrated above. Evolved by Oleg Antonov as the kryl'ataya tanka, this contraption was tested in December 1942 but failed to fly.

The progenitor of the transport glider, the OBS meteorological observation glider.

The KTs-20, designed by Kolesnikov and Tsybin and seen being loaded with a field gun, was evolved to the same specification as the SAM-23, designed by Moskalyev.

Hungary was working on an aerodinamically-refined transport glider, the R-21, and five examples reached an advanced stage in construction when the exigencies of the times dictated the abandoning of further work in 1944. 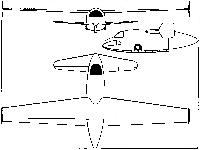 Among more exotic transport glider projects was the canard Gotha P 50 for 12 troops, a Volkswagen or a howitzer.

It was proposed to suspend two Argus impulse ducts beneath the wings of the Gotha Go 345A assault glider.

Prototype of transport glider Ae-53 was under construction in Czechoslovakia but abandoned in the summer 1951 with the availability of Soviet gliders.

Prototype of transport glider LD 605 Haban was under construction in Czechoslovakia but abandoned in the summer 1951 with the availability of Soviet gliders.

The Focke-Achgelis Fa 225 rotor glider which employed a DFS 230B fuselage and tail assembly.

The last transport glider to be built in substantial numbers was the Yak-14, illustrated in Czechoslovak markings.

A General Aircraft Hamilcar disgorging a Locust tank through the side-hinging nose section.

The General Aircraft X.27/40 half-scale model of the Hamilcar.

A typical wooden structure of a large transport glider is illustrated by this drawing of the fuselage of the Hamilcar.

The SAM-23, designed by Moskalyev was evolved to the same specification as the KTs-20, designed by Kolesnikov and Tsybin.