View of CB-16 X-118E at Newark, New Jersey, shortly after completion. It first flew during Christmas week of 1928.

Fig. 4 is a view of the Burnelli monoplane itself, being flight-tested by Lieut. Leigh Wade at Newark (N.J.) airport. The heads of the pilots are clearly seen, thus illustrating the good range of vision obtained. The landing wheels may be retracted into the fuselage, as shown in one of the illustrations in our previous description of this machine.
The CB-16, X-118E, built for banker Paul W. Chapman in 1928. Note his initials on the fuselage side.

The skeleton of the CB-16's fuselage and tail surfaces, showing the truss structure of the former.

THE BURNELLI MONOPLANE: Rear and front views of this new and original American air liner, It is of all-metal construction, and the fuselage has an aerofoil section, which contributes to the lift.
Two views of CB-16 X-118E at Newark, New Jersey, shortly after completion. It first flew during Christmas week of 1928.

The CB-16 under construction in the Aeromarine factory at Keyport, New Jersey.

The Burnelli UB-20 was backed by Inglis M. Uppercu, President of the newly-formed Aeromarine Klemm Corp. It is seen here during an early flight as X397N

The Burnelli UB-20 being flown “hands-off” to demonstrate its stability.

A close-up of the UB-20's two 750 h.p. water-cooled engines during run-up. Note the wheel fairings.

The UB-20 later in life as NR397N, with a Ford car slung between the undercarriage legs. 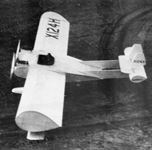 The ungainly GX-3, X124H, built for the 1929 Guggenheim Safe Aircraft Competition, in flight with underslung ailerons.

One of the alternative, pivoting wing-tip ailerons. 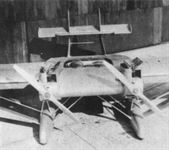 A closer look at the two 90 h.p. ADC Cirrus III engines, the cockpit and the unusual undercarriage.

A flying shot of the GX-3 with pivoting wing-tip ailerons. Its tandem undercarriage wheels are evident.