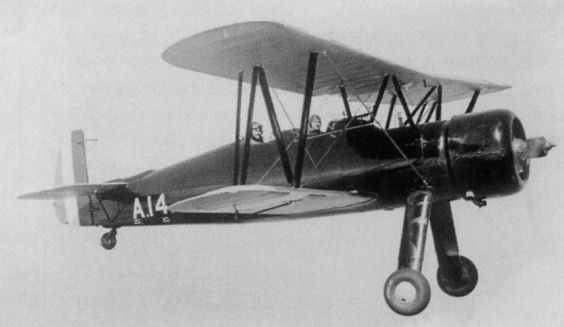 HIGH performance is not always compatible with manoeuvrability. The former can relatively easily be obtained by designing an aeroplane which is devoid of all excrescences, which is small, clean aerodynamically, and therefore has little resistance to being pulled through the air by its airscrew - in other words, a machine which has a very low total drag.
High performance is, however, not the only desirable feature of a fighting aeroplane. It must be easy to manoeuvre so that it can out-fight its opponents without imposing on the pilot and undue strain. Obviously a pilot is far better able to work his guns and generally to be at his best in a fight if the machine he is flying is one in which he feels perfectly at home, regardless of whether he is upside down, right way up, or sideways, and if it is one which virtually flies itself without getting into difficulties.
Unfortunately it is far easier to design an aircraft with these desirable manoeuvrability characteristics when that aircraft does not have to fly very fast than it is to design a modern high-speed machine which may frequently be flying at speeds of over 250 m.p.h. At such speeds it is very easy to produce controls which, while perfectly adequate at low speeds, get so heavy when the speed is increased that the pilot not only has to accustom himself to a new set of conditions but may also have actual difficulty in operation. On the other hand, controls may be so over-balanced, in an attempt to make them light to operate, that they ma; actually take charge at high speeds and could then be the cause of a serious accident.
It will be seen, therefore, that the lot of the designer of machines in this class is by no means a bed of roses.
For some years now there has been a marked tendency to produce monoplane fighters - particularly on the western side of the Atlantic Ocean - but English designers have yet to be convinced that the monoplane can be made is manoeuvrable as the biplane. For that reason we still pin our faith, in the main, to biplanes when manoeuvrability is one of the chief desiderata. Nevertheless, despite the apparent advantages of the monoplane as a means of acquiring speed, our biplanes have proved themselves little, if at all, inferior in this respect.
I recently tried out the new Avro 636. This is a two-seater which has been designed primarily as a single-seater fighter. That sounds somewhat of an anomaly, but the second seat has been arranged in such a fashion that the performance of the machine is not impaired as a single-seater, with the added advantage of a rear cockpit, which can be uncovered when desired and the dual controls brought into use for instruction. The 636 is, therefore: (1) a single-seater fighter of high performance, (2) a two-seater dual-control machine which can be used for instruction in high-speed aerobatics, gunnery, light bombing, and every phase of a fighter pilot's training. Further developments are under consideration whereby the same machine may be used for bombing and army co-operation work or as a two-seater fighter.
A. V. Roe and Co., Ltd., have, as Flight readers know, specialised for many years in the production of training aircraft. They feel that the time has now come when there is a demand for a training machine which will, as a two-seater, reproduce the flying characteristics and performance of the modern high-speed fighter, and the 636 is their idea of a machine which will fill this demand. The correctness of their diagnosis of the requirements is shown by the fact that the authorities controlling the Air Force of the Irish Free State have already bought four of the type.
With a top speed of up to 230 m.p.h., according to the type of engine installed, the 636 is no sluggard, and the production of a two-seater of this class with a performance as good as many of the world's single-seater fighters must be considered an outstanding achievement.
Structurally, the 636, as would be expected, follows Avro practice. The fuselage is a welded steel tube structure, covered with doped fabric stretched over wooden formers, the side panels of the covering being separate detachable units which allow all controls to be examined with a maximum of ease and a minimum of delay. The top decking of sheet aluminium is somewhat unusual, as the cockpits are raised above the top edge of the complete ring-type engine cowling, and from the "hump" thus formed in front of the front cockpit the pilot's two guns project. The main planes and tail units are built up with spars and ribs of high-tensile strip steel, and mass-balanced ailerons are fitted to both the top and bottom planes. The ailerons are balanced aerodynamically on the ''Frise'' principle.

The undercarriage is one of the structural features which can easily make or max an aeroplane. That on the 636 undoubtedly contributes very largely to the quite exceptional performance. It consists of two pure cantilever compression legs, both anchored at a central point in the fuselage in a plane level with the top longerons. The upper point of attachment is in the middle of the cross-strut immediately behind the engine bay. The legs are of large-diameter tubing and are stabilised, at the points where they pass the bottom longerons, by stirrup types of fitting; from this point downward and outward the legs are entirely free of supporting structure, and carry at the lower ends Dunlop wheels with medium-pressure tyres and Dunlop pneumatic wheel brakes. The telescopic portion of the leg which takes the landing shocks contains an oleo device and steel coil springs.
In the air, despite the fact that the 636 is a two-seater, there is little apparent difference between it and a single-seater fighter of the highest class. No two pilots will agree on the most desirable characteristics of the controls; on which is the best combination of force required for operation, effectiveness, tendency of the controls to get heavier as the speed increases, and lag in producing the necessary directive force after they have been moved. Those on the 636 bear the unmistakable Avro (or should I say Roy Chadwick?) stamp. They are absolutely positive, delightfully progressive and well balanced. The ailerons particularly, though to my mind a trifle light (an easily-remedied fault - if it be considered a fault) for instructional work, are as near perfect as we are ever likely to see on a machine of this speed until a totally different method of producing a rolling moment is invented. The elevators and rudder, equally effective for their work, are slightly heavier than the ailerons, but I understand that this point is receiving attention. In any case, as I have already pointed out, controls are so much subject to personal idiosyncracies that it is impossible to criticise them constructively except from one's own point of view.
Aerobatically the 636 is grand. The model tried was one of those destined for the Irish Free State Air Force and was powered with a Siddeley "Jaguar" engine from their stock. It did not appear to be giving a superabundant number of "horses," but, nevertheless, there was no doubt that the makers' performance figures could be obtained. With the high-compression "Panther" engine the performance, both aerobatically and in speed and climb, would be outstanding for a single-seater, and for a fully-equipped two-seater it is astounding.
There is something almost sacrosanct about the performance of our modern fighting aircraft. One feels diffident even in discussing them and certainly, bearing in mind the performance and manoeuvrability of only a few years ago, the standard of to-day seems almost incapable of improvement in most cases - improvement in control I mean, of course, because given more power from the same unit weight of engine we shall be able to get faster machines whether they are biplanes or monoplanes.

The cockpits in the 636 are unusually large and provide ample room for the largest pilots. This is particularly pleasing in prolonged and frequent flying in the inverted position. Nothing hinders the accuracy of aerobatic flying more than a very cramped cockpit; one wants to be snug with everything to hand without being so "tucked in” that one barks knuckles and knees every time one rolls.
Summing up the 636, it is certain that it is entirely admirable for fighter-training and, in fact, it seems to me that so good is it, from the performance point of view, that single-seater fighters may - particularly now that interceptor fighters are virtually dead - fade out altogether and be replaced with two-seaters of this class, not only for training but also for fighting. Two-seater fighters are already being used widely, and if their performance is as good as that of single-seaters there is no excuse for the latter.

This view of the Avro 636, one of those shortly being delivered to the Irish Free State Air Force, shows that the occupants of both cockpits have an excellent outlook. 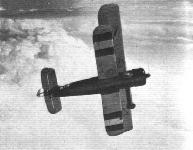 Looked at from the side, the Avro 636, except for the cantilever undercarriage, gives little hint of its outstanding performance.

A head-on view shows where some of the performance comes from - the undercarriage is as clean as possible.

Exceptionally roomy cockpits are a feature of the Avro 636. Adjustable seats and rudder bars make the flying position comfortable for any pilot.
<<   0/0   >>