ON Friday of last week, September 18, the Beardmore-Rohrbach flying boat "Inverness" arrived at Felixstowe after a flight of about 600 miles from Copenhagen, with a stop at Texel. The machine arrived during the visit, by a number of press representatives to Felixstowe seaplane station for the purpose of inspecting the Gloster-Napier III machine built for the Schneider Cup race, and thus many had an opportunity of seeing for the first time the somewhat unorthodox machine designed by Dr. Rohrbach and built in his Copenhagen factory. It will be remembered that last year we were able to announce in FLIGHT that the Beardmore Company had arranged to build Rohrbach machines under licence, and while several Beardmore-Rohrbach machines are now in course of construction at the Beardmore factory at Dalmuir, it was desired to obtain a machine at the earliest possible opportunity for the British Air Ministry, and consequently one of the Danish-built machines was brought over. Similar types are in course of production at Dalmuir.
The Beardmore-Rohrbach "Inverness" is generally speaking similar to the type described in FLIGHT last year, and represents in many ways a bold departure from what has almost become standard practice. Not only is the machine built entirely of Duralumin, no wood or fabric whatever entering into the construction, but the aerodynamic and hydrodynamic design is equally unusual.
As the accompanying photographs will show, the "Inverness" is a twin-engined monoplane flying-boat, a remarkable feature of which is the large dihedral angle at which the wings are set. This has the effect, apart from its advantages, in making the machine stable in the air, of lifting the wing tips well clear of the sea, and thus damage is unlikely to occur. The two Napier "Lion" engines are mounted in streamline nacelles above the wing, where the propellers are well clear of spray, etc. The engines are relatively close together, and thus the turning moment which arises when one engine stops is reduced to a minimum. It is claimed that the machine is able to fly level with one engine stopped, and actually can be turned against the thrust of the working engine.
The hull shape is of interest on account of the flat sides and flat bottom, both unusual features in British flying-boat design. In the case of the Beardmore "Inverness" the straight-frame type of hull probably greatly facilitates the all-metal construction, since it enables flat sheets to be employed with a minimum of working. Lateral stability on the water is obtained by auxiliary floats placed approximately under the engines, which position Dr. Rohrbach has found to give a maximum of lateral stability with a minimum risk of damage.
Other unusual features in the design of the Beardmore-Rohrbach "Inverness" are the trimming tail fin, which, pivoting on a centre pyramid of Duralumin, enables the fin to be set over at an angle so as to relieve the pilot of the necessity of correcting with the rudder a turning moment caused by one engine stopping, and the unusual aileron balances. The "Inverness" is stated to be very stable, and to be capable of being flown "hands off" for quite long periods, even in bumpy weather, a fact which should be of very considerable importance during long-distance nights.
Constructionally, the Beardmore-Rohrbach is unusual in that not only is Duralumin employed exclusively (except for a few highly-stressed wing fittings, etc.), but this material is used mainly in the form of flat sheet, or plain simple angle-sections or channel-sections, easy to work, inspect and repair. The wing structure consists fundamentally of a box, roughly of rectangular section, of a depth corresponding to the ordinates of the wing section, and whose sides form the front and rear wing spars. To this box structure are hinged the leading and trailing edges. Thus, if it is desired to inspect the interior of the wing structure, or to drain out any water that may have collected, all that is necessary is to undo the small bolts of the upper hinges, when the leading or trailing edge drops into a vertical position and enables the interior to be inspected. As the wing is built in sections, each section can be inspected separately, and incidentally in case of damage to a leading or trailing edge only the damaged section need be replaced.
The whole machine has been designed with robustness in view, and owing to the metallic wing covering the machine should be capable of remaining in the open for weeks at a time without fear of deterioration. It is claimed that a method of treatment has been evolved which protects the Duralumin against corrosion, and certainly Dr. Rohrbach has had very long experience of the metal, first during his period with the Zeppelin company and now for several years since he started his own factory after the War.
The petrol tanks which supply the two Napier "Lion" engines are housed in the trailing edge of the wings, where they are well removed from any fire risk, and where also they offer no head resistance.
In conclusion, it may be mentioned that the Beardmore-Rohrbach belongs to the type of machine known officially as a "four-seater open sea reconnaissance flying-boat." According to Deutsche Motor-Zeitschrift, the overall length is 17-2 m. (56 ft. 5 ins.), and the wing span is 29 m. (95 ft.). The wing area is 73-4 sq. m. (791 sq. ft.), and the empty weight is in the neighbourhood of 8,000 lb. No performance figures are available.

The Rohrbach Ro.II taxying; Inset a view of the machine in flight.

THE ROHRBACH RO.II ALL-METAL FLYING BOAT: Two Rolls-Royce "Eagle" Engines. The men standing on the wings give a good idea of the size of the machine.

THE ROHRBACH Ro.II: On the left a view showing the two engines, the nose of the boat, and one of the wing floats. The large wheels are used for transport on land only. On the right a close-up view of the windows, etc., of the pilot's cockpit.

THE BEARDMORE-ROHRBACH "INVERNESS" FLYING BOAT: View of the machine taken shortly after its arrival from Copenhagen.

The Beardmore-Rohrbach "Inverness." View of the nacelles housing the Napier "Lion" engines. 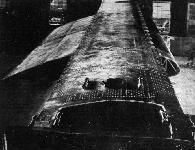 View along the wing of the Rohrbach Ro.II. Note the number of rivets used in attaching the duralumin wing covering.

THE CENTRAL SECTION OF A ROHRBACH WING: This wing, built entirely of duralumin, is in three sections, the leading and trailing edges being separate structures bolted to the main, load-carrying, structure.
<<   0/0   >>