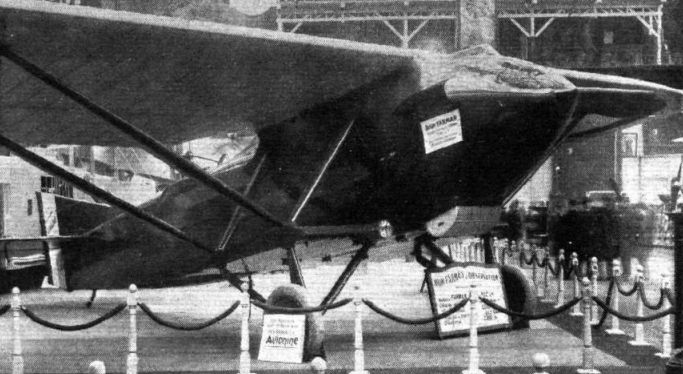 Two complete machines and the fuselage of a third are exhibited on the Farman stand. Of the two it is difficult to say which is the more interesting, and besides, ДальшеMore>>> in spite of the fact that one is a twin-engined and the other a single-engined machine, there are many similarities between them. The one has the advantage of being proved, and of having to its credit the first prize in the last two Grand Prix for commercial aeroplanes, as well as more recently the Coupe Lamblin, while the other is an entirely new type. The former is the famous "Jabiru," photographs and a brief description of which have appeared in FLIGHT, and the latter is a two-seater reconnaissance biplane, or rather "sesquiplan," as the lower wing is of quite diminutive dimensions.
<...>
The Farman two-seater reconnaissance machine is of the same general design as the "Jabiru" as regards its wing structure, which is of the sesquiplan type, with the wing and chassis struts forming the triangulated bracing. One of our photographs shows the machine, and will give a good idea of the general lines. According to the legend on a placard in front of the machine, this Farman is an avion d'observation, and a free view, coupled with a free field of fire for the machine-guns, is evidently the feature aimed at. At the same time good aerodynamic efficiency should be attained, as the lines are certainly very "clean." Just how one gets at the 500 h.p. Farman engine installed in the nose if a sparking plug requires to be changed is not at all clear, as the engine is entirely cowled-in, with no visible means of removing the aluminium cowling. The film shown by Dr. Rohrbach before the Royal Aeronautical Society recently indicated that the most popular tool in Denmark is a hammer. Perhaps the favourite of the Farman mechanics is a tin opener! The machine is painted a sort of orange colour, and looks rather effective. The pilot is placed aft of the rear wing spar, the trailing edge being cut away so as to improve his view, while the gunner is, as usual, placed behind the pilot. Both should get a reasonably good view, the gunner on account of being placed far aft, and the pilot by virtue of the narrow, though long, fuselage deck in front of him. The machine is, we understand, an experimental one, and consequently the performance figures are presumably estimated ones. If they are realised in actual tests the machine should be a formidable opponent.
The engine fitted in the Farman reconnaissance machine is a 500 h.p. Farman, entirely cowled in, and as the Lamblin radiator is placed under the belly of the fuselage the nose itself is extremely clean, and finished off by a spinner on the propeller.
Following are the main dimensions, etc.: Length, o.a., 10-5 m. (34 ft. 5 ins.); span, 15 m. (44 ft. 2 ins.); maximum chord, 3-5 m. (11 ft. 6 ins.); useful load, 1,000 kgs. (2,200 lbs.); total loaded weight, 2,500 kgs. (5,300 lbs.); speed at 5,000 m. (16,400 ft.), 220 km./h. (137-5 m.p.h.); ceiling, 7,000 m. (23,000 ft.).
<...>

Super-streamlining at the Paris Aero Show: The 500 h.p. Farman fighter, a sesquiplan in which streamlining has been carried out to a high degree.

SOME FARMAN DETAILS: 1. General view of the undercarriage of the single-engined reconnaissance machine. Note the headlights in the leading edge, and the Lamblin radiator under the fuselage. 2. Diagrammatic perspective sketch of the system of bracing employed in the two Farman sesquiplans.
<<   0/0   >>