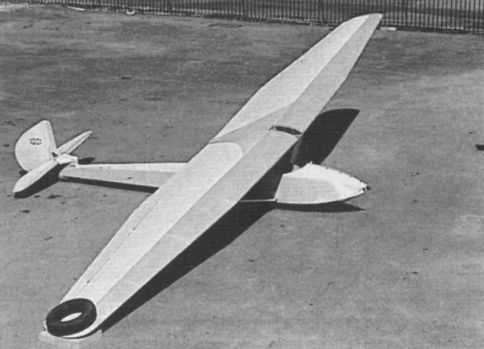 GOING AFTER THE BRITISH RECORD: On July 29 Flt. Lt. E. L. Mole, R.A.F., remained aloft for 6 hr. 55 min. on the Willow Wren glider designed and built by Mr. Manuel, late Corporal, R.A.F. The flight took place in the region of Totternhoe, Dunstable.
A bungee launch - it was very important that the runners kept running! This was the beginning of Edward Mole’s 6hr 55min record flight from Totternhoe in the Manuel Willow Wren on July 29, 1933.

ON SILENT WINGS: A striking picture of the "Golden Wren" sailplane and a Rhon "Buzzard" soaring over Bradwell Edge, Derbyshire, which is proving an increasingly popular centre with Midland and Northern gliding enthusiasts.