DUPLICATED: Latest of the British Aircraft Manufacturing Company's developments, the Double Eagle is eventually likely to be of considerable interest to the smaller air line or charter operator. The pilot has a very good view in all essential directions and, with the low-middle-wing arrangement, the passengers, too, will be able to take an interest in earthly matters. The engines are Gipsy Majors.

Although its Gipsy Sixes are not of the Series II type and it has fixed-pitch airscrews, Tommy Rose's B.A. Double Eagle is expected to give a very good account of itself.

One of the B.A. Double Eagles entered has Gipsy Sixes (Series I) and the other Gipsy Majors. The more powerful version should do 190 m.p.h.

A pleasing "shot" of Flt. Lt. Wilson's Double Eagle coming in at Shoreham on Friday with the stately chapel of Lancing College in the background. 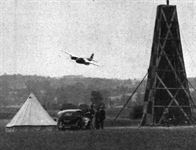 Morton, in the Double Eagle, approaches for one of his close looks at the Buntingford pylon. He finished fifth.

FOR AIR SURVEY: On Thursday of last week the B.A. Double Eagle, which has been specially laid out for survey work, left Hanworth for Johannesburg. It is being flown out by Mr. Brian Russell, the chief pilot of the Aircraft Operating Company of Africa. 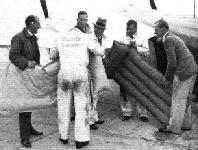 B. A. Double Eagle. Cockpit and controls

B. A. Double Eagle. Moving wing fillet on cabin door

The inner portions of the wings slope upward into the B.A. Double Eagle's fuselage and are smoothly faired.

The left-hand sketch reveals in detail certain of the features of the B.A. Double Eagle. To the right is a close-up of its retractable undercarriage.

A sketch showing the appearance of a nacelle on the B. A. Double Eagle, containing the retracted undercarriage. 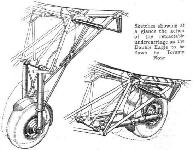 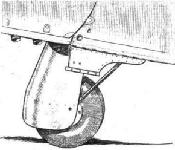 Details of the latest version of the B.A. Double Eagle's retractable undercarriage.
<<   0/0   >>