The B-2 is the oldest stealth aircraft in the current US inventory. It's been operational since the 1990s and has seen combat over Kosovo, Afghanistan, Iraq and Libya.

A crew chief performs a pre-flight check on a B-2 at Whiteman AFB, Missouri home of the 509th Bomb Wing.

Crew chiefs discuss pre-flight checks on a B-2 Spirit before take-off at Whiteman AFB, Missouri.

A Mirage F1CR armed with four Mk82 bombs refuels from a C-135FR during a mission flown from BA172 Kossei-N'Djamena in support of Operation Serval. 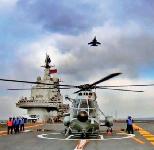 A weapons specialist guides a GBU-39 into the main weapons bay of an F-22.

In August 2012 the Alaska-based 477th Fighter Group and 525th Fighter Squadron became the first operational F-22 units to drop GBU-39s. Flying from Hill AFB, the F-22s dropped the GBU-39s on the Utah Test and Training Range as part of the USAF's Weapons System Evaluation Programme.

F-22 04-4078/'HO' is one of 21 Raptors assigned to the 7th Fighter Squadron at Holloman AFB, New Mexico. Transfer of the 21 aircraft to Tyndall AFB, Florida was 'frozen' by the delay in passing the National Defense Authorization Act and is now due to take place in 2014.

Refuelling a Rafale armed with six GBU-12 laser-guided bombs (and a Damocles targeting pod) during a mission flown from BA172 Kossei-N'Djamena, Chad, in support of Operation Serval.

Rafales loaded with GBU-12 laser-guided bombs taxi to the runway at BA172 Kossei-N'Djamena.

Following a strike on targets in Mali four Rafales are seen arriving at BA172 Kossei-N'Djamena on January 13, 2013.

The JL-9G two-seater is a highly-modified JJ-7 (itself a MiG-21U derivative) featuring a tail hook, side intakes and a new cockpit for land-based ski-ramp and carrier deck training of pilots destined to fly the J-15.

Troops and their equipment from the 17th Parachute Regiment paradrop from a French Air Force Transall C-160 over Timbuktu airport on January 28, 2013.

The Z-9C (a licence-built version of the Eurocopter AS365 Dauphin) is an anti-submarine warfare and search and rescue helicopter that will form part of the Liaoning's air wing.

J-15 552 undergoes servicing while 553 is being moved as part of trials to train deck handlers. Note the different colours of the vests worn by the deck personnel.

Первая посадка опытного J-15 на палубу китайского авианосца
One of the two J-15s painted in primer catches the arrester wire on the Liaoning during the first deck trials in November 2012.

A PLAN J-15 in a single-tone light grey colour scheme. Externally, the J-15 is a full copy of the Su-27K Flanker-D with a completely different avionics suite and weapons. 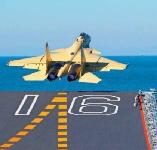 A J-15 departs from the ski-ramp of the Liaoning during the 19-day period of sea trials when the ship was under way in the Northern Bahai Sea.

The J-15 is a Chinese copy of the Russian Flanker-D which introduced an all-new avionics suite and weapons. Production-standard J-15s are powered by two WS-turbofans, each rated at 125kN (28,262lb) at full afterburner. 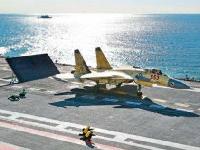 The pilot of J-15 553 prepares to release the brakes and light the afterburners for the short take-off run on the deck of the Liaoning.

F-35A AF-04 with an emergency spin chute installed during a high angle of attack test flight from Edwards AFB, California on November 3, 2012.

F-35B BuNo 168313/'VM12' is currently assigned to VX-23 'Salty Dogs' at NAS Patuxent River, Maryland to augment the ongoing JSF flight-test programme. The aircraft will eventually be re-assigned to VMFAT-501 'Warlords' based at Eglin AFB, Florida.