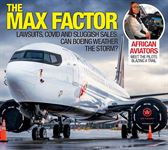 Boeing 737 MAX 7 N7201S is the first of two examples of the smallest-capacity 737 MAX variant, which will be used for flight testing before service entry.
At its peak, Boeing had received commitments for more than 5,000 737 MAXs. This total now stands at around 4,000

The MAX concept began in 2006 when the US giant started studying 737 NG replacements
An Airworthiness Directive on the Boeing 737 MAX calls for several design changes to the aircraft.

Under ever-increasing pressure, Boeing halted production of the jet in January 2020 for five months