Taken in a hangar at the K+W plant in Thun, the only photograph of the C-3601 known to have survived. One of the fins and rudders of a Potez 63 - evaluated in Switzerland before the decision was taken to proceed with the C-36 programme - can be seen above the right wing of the C-3601.

Fascinating though the C-3605 is, it was never designed for an upright front cover! Pragmatic angle on the Speyer Technik Museum's D-FOXY.

Upon retirement, the C-3605 fleet was snapped up by collectors. The Speyer-based Technik Museum in Germany operates D-FOXY, the former C-535.

The last 22 C-3605s were auctioned off in December 1987. Four of the aircraft in this line-up are without engines.

C-3604 C-606 in early 1948 just after being delivered to the Third Squadron of the Surveillance Wing. It carries the staffel insignia on the port engine cowling

The only unit to use the C-3604s operationally was the Third Squadron of the Surveillance Wing based at Dubendorf near Zurich.

The second version of the C-3603-1 Schlepp target-towing variant had the impeller for the SZW-52 winch attached to the starboard side of the fuselage.

C-502, one of the 20 C-3603-1s modified in 1946 by Farner-Werke as Schlepp with DMP towing equipment, eventually became the prototype for the ultimate turboprop-powered C-3605 variant.

C-489 was the only C-3603-1 Schlepp fitted experimentally with the M L Aviation Firefly winch in a container beneath the right wing. A water tank was carried beneath the left wing to balance the weight of the British-developed Firefly gear

Late in the war, when Swiss airspace was frequently violated by the belligerents, conspicuous red and white markings were applied to the aircraft of the FFTrp. C-552 at Dubendorf on June 10, 1945.

Close-up of the unique 'chimney' through which banners were released into the slipstream from the original C-3603-1 Schlepp fitted with the DMP towing system.

Although the negative carries the designation C-3602 written behind the tail of the aircraft, this depicts one of the C-3603 Series 0 aircraft. It has long span wings like those of the C-3601 and C-3602, but is fitted with a retractable main undercarriage, whereas the earlier variants had trousered units.

The C-3602 prototype first flew on November 30, 1939, three months after the C-3601 had crashed during a ferry flight from Thun to Dubendorf.

The Saurer-developed 12 Y-52 powering the C-3604s proved unreliable in service.

The 12 production C-3604s were obsolete when they entered service in 1948. The last ten were withdrawn from use in February 1956.

Taken in a hangar at the K+W plant in Thun, the only photograph of the C-3601 known to have survived. One of the fins and rudders of a Potez 63 - evaluated in Switzerland before the decision was taken to proceed with the C-36 programme - can be seen above the right wing of the C-3601.

Late during their service with front line units, C-3603-1s had rails for Oerlikon rockets added beneath their wings.

C-429 tucked under the starboard wing of another C-3603-1 low over a Swiss town shortly after the end of the Second World War.

C-3603 pilot cockpit. Noteworthy is the fact that instruments and switches are labelled in French, even though German is the native language of more Swiss than the three other national languages combined (French, Italian, and Romansch) combined. 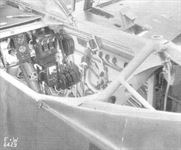