The W 33 D-1167 Bremen which made the first east-west aeroplane crossing of the North Atlantic. It was given upturned wingtips before the flight.
THE GERMAN ATLANTIC FLIGHT: Three-quarter front view of the Junkers W.33 monoplane "Bremen," with 280-310 h.p. Junkers L.5 engine, in which Capt. Koehl, Baron von Huenefeld and Commandant Fitzmaurice flew from Baldonnel to Greenly Island, off Labrador.

W 34b c/n 2601 had a Bristol Jupiter engine and went to Guinea Airways as G-AUGZ.

Luft Hansa’s W 33c D-1696 Taurus. The dark rectangle on the fuselage, forward of the door, is a panel on the base of which are the words London-Berlin.

AB Aerotransport's W 33 SE-ABZ after being fitted with a Pratt & Whitney Wasp engine, making it one of the few radial-engined W 33s. 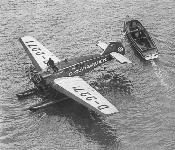 The Ju 46fi D-2271 Bremen at Woolston, Southampton, on September 22, 1933, after being forced down off the Isle of Wight.
LOST AND FOUND: After being catapulted from the German liner Bremen, with mails from America, at 11.30 a.m. on September 21, Herr Gruetering, the pilot (together with a mechanic and wireless operator) was due at Southampton by 7 p.m. He failed to arrive, and a wireless message being received from the pilot stating he was running short of fuel (having lost his bearings), ships and aircraft were sent out to make a search, but without success. Gruetering meanwhile had landed alongside a French trawler, off Ushant, which took him in tow towards England. Early next morning the Junkers seaplane was able to take off and fly to Southampton, where it arrived, as depicted in our illustration, shortly after noon.

Lufthansa’s Ju 46fi D-2271 in a silver paint scheme as the landplane Hamburg.

Lufthansa’s Ju 46hi D-OBRA Bremen when operating German domestic services. It had been the North Atlantic seaplane D-UHYL Bremen and before that the landplane D-2491 Sirius.

SCADTA’s W 34 floatplane Cundinamarca on the Magdalena river. A second W 34 is in the background.