Blenheim If L1426 'RX-M' of 25 Squadron, Northolt, in August 1939. Dark Green/Dark Earth/Night, with the starboard main and tailplanes painted white. Note the elevator and ailerons left in the original night colour. Medium Sea Grey code letters. B type fuselage roundel converted from 33 1/2in A1. Likewise the upper wing roundel was converted into a 47 1/2 B type, leaving a clear image of the original roundels. The under-wing serial would have been over-painted on the port wing.

STRAIGHT OFF THE LINE: A Bristol Blenheim medium bomber fresh in its camouflage paint. The Blenheim is the fastest machine of its type in the world.
Pre-delivery portrait of Mk.I K7037 (note the hyphenated under wing serial number). This machine was delivered to 114 Squadron - the first RAF unit to use the type operationally - at Wyton on March 4, 1937. Its engine cut out on take-off at Wyton on May 10, 1938, causing it to crash and killing the three people on board.

In an attempt to develop a dedicated photo-reconnaissance Blenheim, L1348 was modified with clipped wing tips, faired-over nosed glazing, Rotol three-bladed constant-speed propellers, dorsal turret removed and the bomb bay and other panels taped over

Mk.I L1222 was fitted with outer wing tanks and first flew in this guise in September 1938, in readiness for the so-called ‘Mk.II'. Note also the bombs carried on pylons under the inner wings

Fighter Command underside white/black finish in the 1938-1939 period. The undersurface was to be half white and half black, however, there were many variations when applied at squadron level. Some aircraft in 1939, had 32 1/2in B type roundels applied under-wing. The starboard wing shows the 36in white serial position, normally carried on both wings, it replaced the original 30in high serials from K7045. The latter were also positioned further outboard, level with the outer edge of the aileron.

A pattern camouflage, B pattern was the mirror image, showing the roundel positions: 66 1/2in type A1 to port and the B type conversion to starboard, retaining the outer yellow ring; this was subsequently over-painted 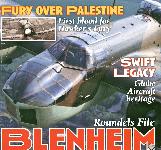 Canadian-built Blenheim (Bolingbroke IVT) G-MKIV in the colours of 105 Squadron, as flown by Wg Cdr 'Hughie Edwards' on July 4, 1941, when he was awarded the Victoria Cross.