OF the two complete aircraft to be exhibited on this stand, one will be the little "Peto" two-seater designed for service with submarines, while the other will be the new "Elf," a private owner's two-seater machine rather beyond the light 'plane class, fitted with the A.D.C. "Hermes" engine.

Certain features upon which the designers have concentrated in producing the Parnall "Elf" are: Improved view of pilot and passenger by seating them behind the top centre-section, which has been dropped almost to eye level; reduced maintenance cost and elimination of all truing-up, by adopting a Warren girder-type rigid-wing bracing; improved performance by efficient design and extra power; and the reduction of folded dimensions to a very small figure so as to enable the machine to be wheeled through an ordinary gateway.
From the three-view general arrangements it will be seen that the Parnall "Elf" is a biplane, with the top plane considerably larger than the bottom, and the wings staggered in relation to each other. Furthermore, the wings are swept back in order to get the centre of lift far enough back to bring the passenger behind the top centre-section. The only other unusual external feature in the wing design is the use of strut bracing throughout, the interplane struts forming a Warren girder as seen in front elevation. Visitors to Olympia will also notice that the fuselage is of generous dimensions, giving very roomy cockpits.
The fuselage is a semi-monocoque structure, with a light internal framework and three-ply covering. The dual controls are built up as a complete unit, and during construction the whole fuselage can be finished, with the exception of this unit, which is then slipped into place through the bottom of the fuselage. The two seats have pans for air cushions, or if the machine is employed for training purposes, or it is otherwise desired to do so, parachute packs may take the place of the air cushions. The fact that both cockpits are aft of the wings should enable both occupants to make use of their parachutes.
A Smith's type instrument board is provided for the pilot. The dual controls make use of cranks and connecting tubes instead of cables and pulleys, the tubes being visible externally, sloping upwards from the sides of the fuselage to the cranks on the aileron tubes in the top plane.
An extra large compartment for luggage, capable of taking one or two suitcases, guns, fishing rods, golf clubs or tent, etc., is situated immediately behind the pilot's cockpit, while forward of the passenger's cockpit there is an auxiliary locker for tool kit and a spare can of petrol.
The biplane wings are of orthodox construction, with spindled I-section spars and wooden ribs. The drag bracing inside the wings is by tie rods, while the incidence bracing between the interplane struts is streamline wire. The ailerons extend the full span of the top plane only and have steel tube spars or torque tubes, terminating at the inner end in cranks by means of which they are operated via the sloping tubes previously referred to. The trailing edge of the lower plane is a separate unit, and has a steel tube spar similar to that of the ailerons. The trailing portion of the lower wing is not, however, used as ailerons, the arrangement being merely incorporated in order to reduce the folded width of the machine by permitting the bottom plane trailing edge to be hinged down for folding. With the wings folded, the overall folded width is but 7 ft. 11 in. The incidence of the tail plane is adjustable while the machine is on the ground, but there is no tail trimming gear for use in the air.
The undercarriage of the "Elf" is of the "split" type, with the inner ends of the bent axles hinged to a small cabane below the fuselage floor. Normally the telescopic legs are of the compression rubber block type, but if desired a double-acting oleo leg can be fitted at extra cost. The tail skid is a leaf spring clamped to the underside of the fuselage. It is provided with a quickly replaceable cast-iron shoe.
As already mentioned, the power plant chosen for the Parnall "Elf" is the new A.D.C. "Hermes" engine. This is mounted on a welded steel tube structure in the nose of the fuselage, the mounting being a detachable unit attached by four bolts to the fuselage proper, from which it is separated by a fireproof bulkhead. The cowling, of sheet aluminium, almost entirely encloses the engine, with the exception of a narrow slit in front and some louvres for the escape of the air. Deflector plates are fitted inside the cowling to direct the air flow on to the cylinder heads. The petrol system is of the engine-driven pump type, the pump keeping the fuel constantly supplied to a small gravity tank in the top centre section. This tank has a capacity of 3 gallons, while the main petrol tank, mounted in the fuselage, has a capacity of 20 gallons.
The main dimensions of the Parnall "Elf" are :- Length overall, 22 ft. 10 1/2 in.; wing span, 31 ft. 3 1/2 in.; wing area 195 sq. ft.; width, folded, 7 ft. 11 in.; height, 8 ft. 6 in.; wheel track, 5 ft. 6 in.
The tare weight is 900 lbs., and the "Aerobatics" Certificate of Airworthiness covers a gross weight of 1,500 lbs., so that the disposable load may be at least 600 lbs. This leaves a good margin for luggage, &c.
The "Elf" having but recently been completed, actual performance figures are not yet available, but following is the estimated performance :- Full speed at ground level, 116 m.p.h.; at 5,000 ft., 112 m.p.h.; cruising speed, 103 m.p.h.; stalling speed, 40 m.p.h. The ground rate of climb is 800 ft./min., and the ceiling 16,000 ft. The range is approximately 400 miles.
If desired the Parnall "Elf" can be fitted with a twin-float undercarriage, when it should be a very useful seaplane.
<...>

PRODUCED by George Parnall and Co., of Bristol, the "Elf" is a private owner's machine that is rather heavier than most other light aircraft. It is fitted with the "Cirrus-Hermes" engine, and the designers have concentrated on certain points which make this machine somewhat different from the majority of light 'planes.
Both seats are placed behind the top centre section with the object of giving both the pilot and passenger a better view, and the centre section itself has been dropped to eye level. The wing bracing is in the form of rigid Warren-girder strut bracing which eliminates all necessity for truing up or adjusting wires, a job which is usually associated with biplanes. Particular attention has also been paid to the question of folding, and the overall width when folded has been kept down to a very small figure.
The fuselage is very roomy and consequently the cockpits are very comfortable. It is built on the semi-monocoque principle, with a comparatively light internal structure covered with ply-wood.
The controls, including the dual controls, are built as a separate unit, and can be placed in position through the bottom of the fuselage when this is finished. Luggage is very amply provided for by a large compartment behind the pilot's cockpit, and in front of the passenger's cockpit there is also a locker which can be utilised for a tool kit and a spare can of fuel.
The wings are of normal construction with spindled spruce spars and spruce and ply-wood ribs, and the covering is fabric. The ailerons are operated by tubes and also have tubular spars, and the trailing edge of the lower wings, of a corresponding width to the ailerons, is built as a separate unit, so that it can be folded up when the wings are folded and thus reduce the overall width in this condition.
The fuel arrangements are somewhat different to the normal machine of this class, as the main fuel tank is in the fuselage and holds 20 gallons, and an engine-driven pump supplies fuel from this tank to a small gravity tank, holding 3 gallons, in the centre section, from whence it is fed to the engine by gravity.
Throughout, the general idea of the "Elf" has been to produce a machine which requires no complicated upkeep and which, through its sturdiness, will give the private owner no trouble at all without having to have constant expert attention, hence the rigid wing bracing and the ply-wood covered fuselage. 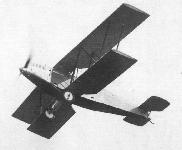 The prototype bearing the registration marks G-AAFH. This Elf was later sold to Lord Apsley of Badminton, Gloucestershire.

G-AAIN is seen at the Fifty Years of Flying event at Hendon in July 1951.

Mr. Norman Edgar's depot with three of his Parnall "Elfs" and a "Wee Bee" lined up for inspection.

The prototype at Yate with wings folded.

STRENUOUS BUT USEFUL: There was a close finish in the "Utility Race" between the crews of a Parnall "Elf" and a De Havilland "Puss Moth," the latter arriving on the ground first but gliding a long way, while the "Elf" was landed very near the finishing line.

The Phillips & Powis "Desoutter" (Hermes) piloted by Mr. S. Cliff winning by a short head from Mr. Norman Edgar in the "Elf" (Hermes).

On the Parnall Stand: In the foreground the "Peto" seaplane designed to work with submarines. Behind it the "Elf" two-seater civilian machine. 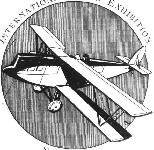 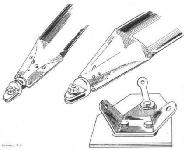 The Interplane struts on the Parnall "Elf" are arranged as a Warren girder. Sketches show strut ends and fittings. 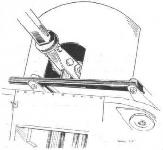 View from above into cockpit of "Elf," showing lower end of joystick and aileron cranks.

The ailerons in the "Elf" are operated by crank levers and external tubes, the flaps having torque tubes and cranks. 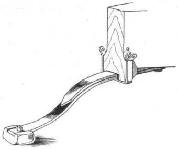 The tail skid of the Parnall "Elf" is a laminated steel spring with replaceable cast-iron shoe.

Attachment of wood ribs to torque tube in "Elf" ailerons.

A hinged lever, normally folded flat against the spar, holds the folded "Elf" wing in place against the fuselage.