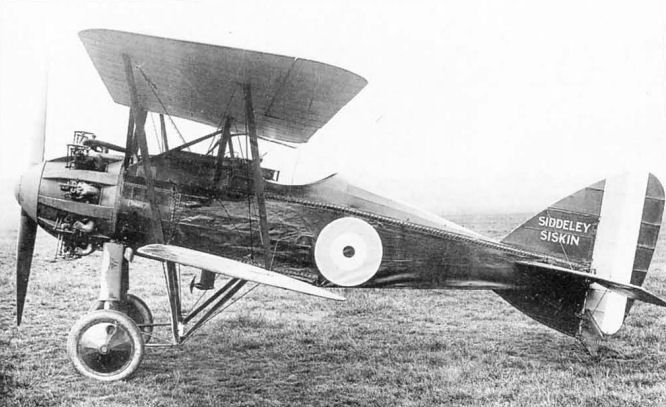 THE "Siskin" single-seater fighter, which is being exhibited by this firm, is an improved and modified version of the type ДальшеMore>>> originally designed for and supplied to the British Government. All the experience gained in the Great War has been embodied in this machine. It is robustly constructed, and the detail work has been carried out with extreme thoroughness and care. The landing gear enables it to be used on rough country, and very favourable reports in this connection have been received from pilots who have flown the "Siskin." The pilot has an excellent range of vision, while the position of the machine guns - two or three of which can be fitted - is such that they can easily be controlled and adjusted during flight.
It is fitted with a 320 h.p. "Jaguar" engine, and its performance, particularly at high altitudes, is exceptional. Its speed and climb, combined with great manoeuvrability, go to make it one of the most formidable fighting machines yet produced.
The following are some of the outstanding features of the "Siskin." The fuselage is of steel tube throughout, braced with tie-rods, and no welding is used anywhere in its construction. The wings are built up of wood, with hollow spars of ample section, and the interplane struts are of steel, so constructed that the machine requires a minimum of truing-up.
By seating the pilot with his eye in line with the chord of the top plane, an unobstructed view of the upper hemisphere is obtained, whilst the view downwards is also very good owing to the narrower chord of the lower plane and the comparatively narrow fuselage.
The "Jaguar" engine is mounted on a pressed-steel frame in such a way that it can be withdrawn from the machine without disturbing the carburettor or any other of its parts. All ordinary adjustments to the engine can be carried out without removing any part of the cowling, which remains on the engine when this is dismounted. A fireproof bulkhead is mounted between the engine and the petrol tank, and the air intakes are taken well outside the aeroplane.
Petrol is fed to the engine from a gravity tank, which is kept full by means of a wind-driven pump, drawing its supply from a main tank in the fuselage. Surplus petrol drains back into the main tank, via an indicator gauge.
The "Siskin" is fitted with a patent Oleo landing gear, which enables landings to be made in small and rough fields with a minimum of shock. The tail skid is of exceptionally robust construction, and is arranged to swivel with the rudder to facilitate steering on the ground.
As regards structural strength, the "Siskin" is designed not only to have a high factor of safety, but also to be as safe as possible if damaged by enemy fire. A complete system of bracing is provided to the lower plane in such a manner that the load of any wire can be taken by two other wires if it should be broken. Furthermore, a wing strut can be shot away without the machine collapsing in flight, as each plane is supported by independent bracing.
The normal load carried by this machine is 400 lbs. (182 kgs.), including 180 lbs. (81-5 kgs.) for the pilot, but exclusive of petrol and oil, which are respectively 40 galls. (181 litres) and 5 galls. (22 litres), giving an endurance of from 1 3/4 to 3 1/2 hours. With the above load, the speed is 148 m.p.h. (238 km.p.h.) near the ground, 140 m.p.h. (225 km.p.h.) at 10,000 ft. (3,060 m.), and 130 m.p.h. (209 km.p.h.) at 22,000 ft. (6,710 m.). Landing speed, 50 m.p.h. (80 km.p.h.). The time taken to reach 10,000 ft. (3,060 m.) is 8 mins., and to reach 22,000 ft. (6,710 m.), 25 mins. The ceiling at full load is 26,000 ft. (7,950 m.).
The leading characteristics of the "Siskin" are :- Span, 28 ft. 4 ins.; length, 21 ft. 6 ins.; height, 9 ft. 6 ins.; area of main planes, 253 sq. ft.; weight fully loaded, 2,250 lbs.; loading per sq. ft., 8-9 lbs.; loading per h.p., 7 lbs.

The Armstrong-Siddeley "Siskin" single-seater fighter-scout, fitted with a 350 h.p. "Jaguar."

AN EVENT AT THE PAGEANT: Duel between a Siddeley-Nighthawk and a Siddeley-Siskin - the latter is seen at the top making a sharp turn after the latter. Below is "R.33" hovering in the haze.
<<   0/0   >>