ON June 9, some further flying trials were carried out at Southampton with the large twin-engined amphibian flying boat designed some time back by the ДальшеMore>>> Supermarine Aviation Works, Ltd., of Southampton. The Supermarine "Swan," the flying boat in question, was actually constructed in 1924 to the order of the Air Ministry for passenger work, and was launched on March 25, 1924, but was not at that time equipped for passenger carrying, and was fitted with two Rolls-Royce "Eagle IX's ".
Shortly after the "Swan" went to Felixstowe for its official trials, which proved so satisfactory that the Air Ministry decided that, with certain modifications, it would make an efficient Service machine. Mr. Mitchell, its designer, therefore, set to work in re-designing the "Swan" to suit Service requirements' and eventually evolved the "Southampton," which is now one of the standard machines of the R.A.F.
In the meantime, the "Swan" went back to Southampton, and in due course was fitted out for the work for which it was originally intended - passenger-carrying for civil air lines. This work has recently been completed and, as previously stated, practical flying tests carried out.
In its present form the "Swan" is fitted with two Napier "Lion" engines, whilst the cabin equipment, &c, presents several noteworthy features. The passengers' cabin is located in the hull, and is exceptionally roomy and conveniently laid out. Accommodation is provided for ten passengers, who are seated in comfortable wicker arm-chairs. These are arranged on either side of the cabin, leaving a small gangway in between. Beside each seat is a porthole in the wall of the cabin, through which the passenger has an excellent view of the sea-scape below.
Forward of the cabin is a compartment for luggage, &c, access to which is by means of a door leading directly into the cabin and via a hatchway from the deck. Aft of the cabin there is lavatory accommodation.
The interior of the cabin generally is bright and pleasing, the upper arched portion being given a light finish and is adorned with framed aviation pictures, while the lower portion has padded upholstery.
Pilot and navigator are accommodated in a separate cockpit or "cabin" located on the top of the hull, between the main planes. All the controls are located at this point. The engines are mounted, as usual, on either side of the control cabin midway between the top and bottom planes, and each drives a four-bladed tractor air screw.
On the occasion of its recent flying test the "Swan" carried its full complement of passengers, made up of eight young ladies employed at the Supermarine Works, a representative of Imperial Airways, and a member of the Press, whilst the pilot, Capt. H. C. Biard, was accompanied by Capt. F. J. Bailey, manager of the Woolston airport. After taxying to a favourable position opposite the Government Rolling Mills, the "Swan" took off in a comparatively short run and headed down Southampton Water to Hamble River, then turned back towards the docks. Flying at altitudes varying from 100 to 1,200 ft., the "Swan" made two trips to Lee-on-Solent, during which two perfect landings were made. After about an hour's flying, the "Swan" returned to its nest, having given a very satisfactory account of itself.
It may be of interest to note in conclusion that news has just been received by the Supermarine Aviation Works, Ltd., from their chief designer, Mr. Mitchell, who is in Copenhagen, that a contract has been signed with the Danish Government for a large three-engined flying boat. This machine will be built at the Supermarine Company's Southampton Works, and will be fitted with three "Jaguar" air-cooled engines manufactured by Messrs. Armstrong, Siddeley, Ltd. It is worthy of note that this contract has been secured in the face of strong continental competition.

THE SUPERMARINE "SWAN" COMMERCIAL FLYING BOAT: This view shows the "deck-cabin," above the main passenger cabin, which forms the business quarters of the machine. It houses the'pilot, navigation, and all controls.

The Supermarine Swan in civil form as G-EBJY.

Originally serialled N175, the Swan G-EBJY was the aircraft from which the Southampton directly evolved.

THE NEW SUPERMARINE AMPHIBIAN FLYING BOAT: View of the machine taking off and, inset, in the air.

The Swan G-EBJY airborne at Southampton.

A NEW SUPERMARINE AMPHIBIAN FLYING BOAT: This machine, fitted with two Rolls-Royce "Eagle" engines, has been built for the Air Ministry, and it is not permissible to give technical details. The main features of the design will, however, be evident from the illustrations. Capt. Biard took the machine out recently, and, after a short taxying test which proved the machine to be satisfactory, he took off and carried out a flying test of 45 minutes' duration. An unusual feature of the design is the raised, or "coach-roof" cabin top. The high flaring bows should render the boat capable of riding out quite a heavy sea.

THE PRINCE OF WALES VISITS SUPERMARINE AVIATION WORKS: A view of the works, slipway, etc., with a "Swan" amphibian being brought out. 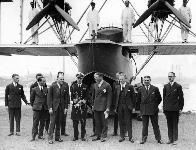 Supermarine staff line up in front of the sole Swan flying-boat (initially an amphibian) during a visit by Edward, Prince of Wales, in June 1924. Among those present are designer R.J. Mitchell (third from right), and partly obscured by Mitchell, Henri Biard, who had made the aircraft’s maiden flight that March.

Looking forward through the cabin of the Swan. Seating accommodation is provided for ten passengers. Nearest on the right is R. J. Mitchell.