NO. 58: The Airspeed A.S.8 (two Siddeley "Cheetah VI") which will be flown by Capt. Stack and Mr. Turner, is similar to the Airspeed "Envoy" in general design, but has more powerful engines.

Эрспид AS.8 "Фицрой" вернулся в Англию, не завершив гонку
ENTER THE "VICEROY": Capt. Stack taxies the Airspeed "Viceroy" (two supercharged "Cheetahs") towards the apron.
Stack's Viceroy taxies in at Mildenhall for the start of the race. Withdrawn at Athens, it was so heavily handicapped that it had no chance of winning.

The one and only Airspeed Viceroy, G-ACMU, was built to the order of Capt T. Neville Stack for the 1934 MacRobertson Trophy Race from England to Australia.

COMPLETE EQUIPMENT: An interior view of Capt. Stack's Airspeed "Viceroy," showing the wireless equipment, the chart table, and, in the pilot's department, the P.B. Automatic Pilot.

ON THE "VICEROY": One of the landing searchlights which are mounted inside the leading edges on the Airspeed "Viceroy." The aperture is transparently covered. 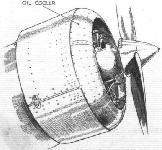 In the Airspeed "Viceroy," or A.S.8, manned by Stack and Tuner, the oil coolers for the Siddeley "Cheetah" VI engines form the leading edge of the cowlings.