An E-3F from EDCA O/36 refuels during one of the Operation Chammal deployments undertaken by the type since September 2014.

Initial assessment phase testing ensured there were no gross effects on the Merlin flight profile with the radome attached.

All 30 Merlin HM2s in service modified and fit to receive the Crowsnest role kit, of which ten will be delivered.

The Merlin HM2 continues to receive upgrades to enhance its capabilities in addition to Crowsnest. These include a new traffic avoidance system and updates to the defensive aids suite.

Australia’s first F-35A Lightning IIs, A35-001 and A35-002, fly in formation with No.2 Operational Conversion Unit F/A-18A Hornet displaying its 75th anniversary livery on transit to the Australian International air show in Avalon.

P-8A Poseidon test aircraft BuNo 167954 during an air refuelling test sortie with KC-135R 61-0320, the tanker assigned to the 412th Test Wing based at Edwards Air Force Base, California. 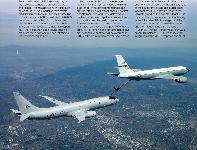 French and German medical staff train on board a C-135FR outfitted with the MORPHEE mobile intensive care unit.

A Mirage 2000-5 from EC 1/2 ‘Cigognes’ loaded with an inert MICA air-to-air missile is put in a shelter at BA116 Luxeuil after an early afternoon mission.

A HH-60G Pave Hawk winches a casualty aboard at the Del Valle Regional Training Centre.

Armee de I’Air personnel load a RECO NG pod to the centreline station of a Rafale prior to a reconnaissance mission over Iraq or Syria.

A total of 45 TALIOS pods will be acquired by the DGA to replace older types of designator pods used by the Armee de I’Air and the Aeronavale.

Armee de I'Air armourers load a GBU-24 to a Rafale participating in Operation Chammal. Both the Aeronavale and the Armee de I’Air fly the Rafale loaded with only one GBU-24 on the centreline station.

The solution being developed for Crowsnest is an updated and repackaged role-fit version of the Cerberus tactical sensor suite in service with the SKASaC.

A Stockton-based California Army National Guard CH-47F from the 1-126 Aviation Regiment, on the flight line at Los Alamitos.

An ALAT Puma helicopter in the Sahel region for Operation Barkhane. Note the MAG-58 machine gun for self-protection.

The Shadow 200’s primary mission system is an Israel Aerospace Industries POP300, which is formed by a forward-looking infrared camera, a daylight TV camera (equipped with an optional near-infrared filter) and a laser pointer.

One of the Shadow 200 UAS ready to be launched from its launcher system.

A Shadow 200 UAS system operator at work inside a ground control station.

An MQ-9 Reaper, assigned to ED 1/33, during an Operation Barkhane mission over Niger.

An AS555AN with snipers on board during a Mesures Actives de Surete Aerienne exercise in March 2017.

A Caracal from EH 1/67 ‘Pyrenees’ banks above the water near BA120 Cazaux during an exercise with Armee de I’Air divers. Since April 2017, the Caracal is responsible for the SAR alert at Cazaux.

The powerful MX-15 imaging sensor carried by the LUH-72 Lakota is ideal for disaster and battlefield applications. 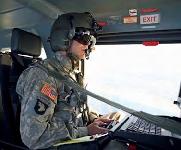 The two aircraft types operated by 28° Gruppo Squadroni ‘Tucano' taken in-flight is an uncommon sight, considering their quite different performances and flying qualities.

One of the three Do 228s operated by 28° Gruppo Squadroni seen while flying near Viterbo.

A Do 228 while taxiing. The black radome on the nose protects the antenna of the King KWX-56 radar, which has weather and mapping capability.

The Do 228 cockpit clearly shows its age, as it is dominated by analogic instruments.

The two aircraft types operated by 28° Gruppo Squadroni ‘Tucano' taken in-flight is an uncommon sight, considering their quite different performances and flying qualities.

A VC-180 overflying Lake Bolsena, north of Viterbo. The operational missions of this type are authorised only by the Army General Staff.

Two VC-180s inside the Tucano’ hangar at Viterbo Air Base. Most of the technical and support activity on these aircraft are assigned to Piaggio Aerospace.

On static display at Avalon, EA-18G A46-306 carried a pair of ALQ-99 jamming pods and AGM-88B High-Speed Anti-Radiation Missiles.

The EA-18G Growler is always distinguishable from a Super Hornet by its wing tip pods housing the ALQ-218 receivers.

P-8A Poseidon test aircraft BuNo 167954 during an air refuelling test sortie with KC-135R 61-0320, the tanker assigned to the 412th Test Wing based at Edwards Air Force Base, California.

A High Altitude Anti-Submarine Weapon Capability (HAAWC) torpedo was released from a P-8A Poseidon during safe separation testing. The HAAWC is an add-on kit for the Navy’s Mk54 lightweight torpedo that allows the P-8A to release the weapon from high altitude.

An electronic warfare operator monitors his work station on a P-8A Poseidon during a search and rescue mission for Malaysia Airlines flight MH370.

A Mirage 2000N assigned to EC 2/4 ‘Lafayette’ taking off from its base in Jordan carrying four GBU-12s, a weapon payload validated by the CEAM in 2015. Note the Magic 2 air-to-air missile for self-protection.

A Mirage 2000D pilot conducts pre-flight checks with a mechanic. The Mirage 2000D can carry one SCALP missile.

A Mirage 2000D with full afterburner on its way to the Diane range near BA126 Solenzara on the island of Corsica.

A Rafale B from the Escadron de Chasse et d'Experimentation 1/30 ‘Cote d'Argent’ taking off for another Chammal mission, carrying four GBU-12s and a Damocles designator pod.

An AS555AN with snipers on board during a Mesures Actives de Surete Aerienne exercise in March 2017.

Australia’s first F-35A Lightning IIs, A35-001 and A35-002, fly in formation with No.2 Operational Conversion Unit F/A-18A Hornet displaying its 75th anniversary livery on transit to the Australian International air show in Avalon.

A Rafale M during an Appontage Simule Sur Piste session, working up for the next Charles de Gaulle cruise.

A Rafale M from 12F with live GBU-12 bombs during one of the first flights for Operation Chammal in April 2017.

Numerous sensors including the Selex Seaspray 7000 radar can be seen on this side profile.

P-72 CSX62279 seen on a test flight from Verona airport. Note the installation of a high-powered search light near the starboard side nose.

An extension to the aft fuselage houses the electronic support measures system and mounts for a future magnetic anomaly detector boom.

The P-72A cockpit resembles the commercial ATR 72-600, including a mission display and a DASS control system.

The aft cabin has two observer seats each adjacent a bubble window.