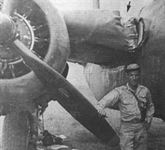 Ken Hedges with his damaged Douglas A-20 Havoc which he flew through a coconut tree in New Guinea in March 1944. 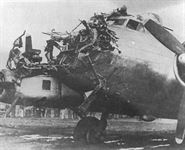 2nd Lt Frank E. Valesh brought this badly damaged B-17 back to Britain after a raid over Germany.

This 37 Sqn B-24 Liberator was hit by bombs from a “friendly” bomber while on a raid over Northern Italy. Luckily the bombs had insufficient time to arm and the turret was unoccupied. 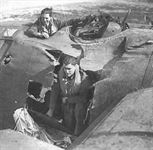 This 37 Sqn B-24 Liberator was hit by bombs from a “friendly” bomber while on a raid over Northern Italy. Luckily the bombs had insufficient time to arm and the turret was unoccupied. Sqn Ldr Saxby and Plt Off Barker (bomb aimer) are seen inspecting the damage. 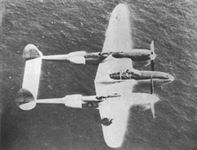 This 7th Air Force Lockheed P-38L was hit by flak while on a strike mission to Iwo Jima. With a 4ft diameter hole in the starboard wing and damage to the port engine Lt Fred C. Erbele fought for 4hr 40min to bring the crippled aircraft back to its Saipan base.

A US Navy Helldiver glides towards the water after being catapulted off the escort carrier Makassar Strait. As the aircraft touches the water the pilot "gives her the gun" and climbs away to safety. 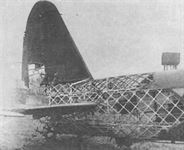 In 1940 two Ansons collided near Wagga, New South Wales at 3,000ft. The pilot of the lower aircraft and the crewmen of each baled out. LAC Leonard Fuller, the pilot of the top aircraft, flew the combination as one aircraft and set it gently down in a paddock. Fuller was killed in 1944 when a bus collided with his bicycle.

Fg Off A. G. Oxblade and Flt Lt D. M. Shanks limped home in this 464 Sqn RAAF Mosquito on February 21, 1944 following flak damage to the wing, port engine and hydraulics.