Although heavily retouched, this view of Gamecock I J8421 shows well the wing markings of 43 Sqn. After less than a month with this unit, J8421 passed to 23 Sqn.

Hooton Air Pageant: Three Gloucester ''Gamecocks" of No.23 (Fighter) Squadron flying past the enclosures in very close formation. They gave a thrilling show of air fighting and aerobatics.
A formation of three 23 Sqn Gamecocks led by J7903 with J7894 nearest the camera. J7903 was lost on November 7, 1929 when it collided with J8409 near Wallington, Surrey.

Two 23 Sqn Gamecock Is possibly photographed at RAF Kenley. Nearer the camera is J7914, destroyed when it stalled off a steep turn after taking off from Sutton Bank, Lincs on August 14,1929. Behind is J8406. 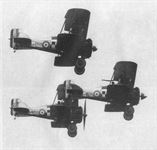 R.A.F. ITEM: Three R.A.F. Gloster "Gamecocks" flying low in formation. These machines played a prominent part in the Pageant.
Gamecocks J7908, J8090 and J8415 taking part in the Hampshire Air Pageant held at Hamble on May 31, 1928. J8415 collided with Gamecock J8094 over RAF Kenley on March 1 the following year.

A delightful photograph of 23 Sqn Gamecock Is. J8082 has just been started with the help of a Hucks starter, which is about to attend to the second aircraft.

"SISKIN" v. "GAMECOCK": The two types represented in the Sassoon Cup: The Gloster "Gamecock" (Bristol "Jupiter") piloted by Sergt. Freeman (Kenley)
Classic Flight photograph of Gamecock I J8409, showing well the 23 Sqn fuselage markings. Sgt Freeman from RAF Kenley takes off from RAF Northolt on May 28, 1929 at the start of the Sassoon Cup race. He came fourth.