CAMS 37c F-AJHR l'Aurore (Dawn) pictured at Sartouville on the Seine. It was one of the two single-engined flying-boats used by Societe Transatlantique Aerienne for catapult flights from the deck of SS Ile de France in 1929 and 1930.

The Latecoere 521 Lieutenant de Vaisseau Paris in flight on October 27, 1937, the day after it established a new world long distance record for flying-boats, crossing the South Atlantic.
RECORD-BREAKER: The Latecoere flying boat Lieutenant de Vaisseau Paris, looked upon in many quarters as a white elephant, has just proved its particular efficiencies by breaking the world's flying-boat long-distance record, which was previously held by an American Consolidated boat. The Lieutenant flew 3,612 miles from Kenitra (Morocco) to Maceio (Brazil) in 36 hours. At the time of going to press she was on her return journey.

The upper part of the Latecoere’s hull is towed out of the Montaudran works by a Renault farm tractor before the 'boat's transfer to Biscarrosse. The hull was protected on the 300km journey by a metal framework. 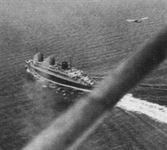 The Latecoere 521 is dwarfed by the liner Normandie - June 12, 1935. It would be 1957 before North Atlantic air passengers outnumbered those going by sea.

Assembly of the Latecoere at Biscarrosse. The articulated sponson is clearly shown, as are the engine mountings with engine Nos 4 to 6 installed and fitted with Ratier variable-pitch propellers.
NEARING COMPLETION: The giant Latecoere boat Lieutenant de Vaisseau Paris, designed for the South Atlantic crossing, in course of erection at Biscarosse. A maximum speed of 155 m.p.h. and a useful range of about 2,800 miles are expected. The engines are Hispanos and the maximum permissible all-up weight will be 81,570 lb. with an actual payload of 26,000 lb.

Assembly of the Latecoere at Biscarrosse. The articulated sponson is clearly shown, as are the engine mountings with engine Nos 4 to 6 installed and fitted with Ratier variable-pitch propellers.

Early in 1935 the Latecoere is ready to take to the water at Biscarrosse, mounted on its special launching dolly.

A trial assembly of Latecoere 521 Lieutenant de Vaisseau Paris at the Toulouse Montaudran plant of SIDAL in 1934. The sponsons, which also served as fuel tanks, were articulated on the hull and on the wing struts; the bulged undersurfaces became floats near the tips.

Liore et Olivier 198 F-AIQP of Societe Transatlantique Aerienne on its catapult aboard SS Ile de France on August 3, 1928, six days before leaving Le Havre for the voyage to New York during which the first catapult mail flight was made.