The pilot's cockpit of the ATE Super Hind Mk III is dominated by a new head-up display.

A line of Hinds at Monchegosk AB during in September 2012. 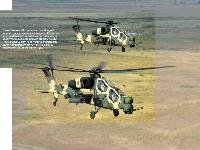 Ground crew watch as TAI test pilots prepare to depart from Akinci for a test sortie. The two aircraft shown, BG1001 and BG1002, were delivered to the KKK in the EDH configuration.

A Rooivalk fires a Mokopa anti-tank missile during a test flight. The Rooivalk can carry up to 16 Mokopas on the inner two pylons of each stub wing. Although the Rooivalk is cleared to fire the Mokopa, the SAAF has yet to buy any of the missiles.

The Rooivalk can comfortably fly backwards and can reach sideways speeds of 50 knots (93km/h).

The Denel Rooivalk is the only attack helicopter to be designed and built in Africa.

The South African Air Force operates 11 Rooivalks which are assigned to 16 Squadron, based at Bloemspruit Air Force Base near Bloemfontein in the Free State. Deliveries began on January 6,1999.

The pilot sits above and behind the weapons system officer in a separate aft cockpit. Both environmentally controlled cockpits are interchangeable and have dual flight controls, which includes hands on collective and stick.

An Apache AH1 takes off from the flight deck of HMS Ark Royal during an exercise off the Cornish coast.

An Apache AH1 being lifted from the hangar to the flight deck onboard HMS Illustrious. 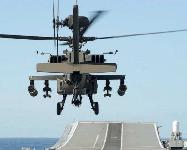 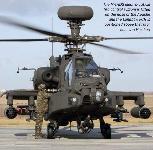 The M-TADS electro-optical fire control system is fitted on the nose of the Apache and the Longbow FCR is positioned above the rotor hub.

HIDAS utilises multi-spectral sensors. This shot shows two such sensors, one on each side of the Apache's forward fuselage.

An Apache AH1 flown by No.656 Squadron Army Air Corps fires a Hellfire missile during an exercise conducted from HMS Ocean.

The Brazilian Air Force was the second export customer for the enhanced Mi-35M. Nine of the 12 Mi-35Ms ordered by Brazil have been delivered so far, the final three will follow in 2013.

The Mi-35M front cockpit is dominated by a display for the electro-optical sensor used by the weapon system officer for targeting using the bulky hand controller shown. 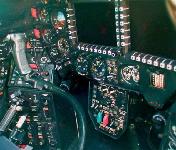 The Mi-35M pilot's cockpit was upgraded with a pair of LCD displays of the KNEI-24 digital avionic package for displaying flight, navigation and targeting information. 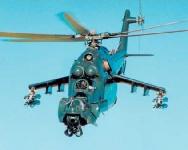 Advanced Technologies and Engineering of South Africa undertook the most successful Hind upgrade programme outside Russia so far. An export order covering as many as 40 Mi-24s was signed in 1999, and the first upgraded helicopters dubbed Super Hinds were supplied to Algeria in the same year.