This is a war-time picture of a Short seaplane leaving Plymouth Sound for a submarine patrol in the Channel. Plymouth Hoe is very distinctive in the centre. These Short seaplanes were widely used for sea patrols all round our coasts. They were fitted with 225 h.p. Sunbeam engines, carried two bombs (250 and 100 lb.), complete wireless equipment, and a crew of two. Their range was over 6 hours, and they were noted for extreme stability.

MELBOURNE AIR PORT: The new air port of Australian Aerial Services, Ltd., at Melbourne, which were opened recently by His Excellency, the Governor-General. The new premises - which are shown at close quarters - adjoin a dead-end tributary of the river Yarra, which, it is intended, will be used as a seaplane base. The machines shown include a Sopwith "Wallaby" and A.N.E.C. biplane.

VARIETY : "Something for every taste" is a saying that seems to apply particularly to the Avro "Gosport" training machine. Our photograph shows three of these, of which the one in the foreground is fitted with the new Avro "Alpha" engine. The next has an Armstrong-Siddeley "Mongoose," and the last a Gnome Monosoupape.

"AIR-MINDEDNESS": The Supermarine-Napier S.5 seaplane on which Flight-Lieut. Webster won the Schneider Trophy Race on view at the Horse Guards' Parade. If the machine had not been two months en route from Venice, the interest in it would have been considerably greater. Inset, Mr. R. J. Mitchell and Mr. G. S. Wilkinson, designers of the machine and engine respectively.

WITH THE EAST KENT F.C. at LYMPNE: In conversation with Capt. H. S. Broad, who is seated in the D.H. "Moth" are (left to right) :- Capt. Braddell, Air Vice-Marshal Sir Sefton Brancker and Mrs. Marie Coleman. This "Moth'' in which Sir Sefton flew down from Croydon was fitted with the Handley Page slotted wing device, and was demonstrated at Lympne by Capt. Broad.

Miss W. E. Spooner, a private owner of a "Moth" and a member of the London Aeroplane Club with whom she graduated, recently flew her machine to Chard, Somerset, to visit her brother, Capt. Spooner. She is seen here standing by her machine at Chard.

The Waco 10 fitted with Fairchild-Caminez engine, used in the fuel consumption tests. Note the large diameter propeller and the small size of the engine (135 b.h.p.).

THE WESTLAND "WIDGEON" ABROAD: These three views were taken in Australia at the christening of the "Widgeon" which was shipped to Brockway Motors, Ltd., Australia, who have included the sale of light aeroplanes as a branch of their motor business. This particular machine was entered by them in the Queensland Aerial Derby Speed Championship Cup Race on November 12, and it won the prize.

A close-up of the 424h.p. Pratt and Whitney "Wasp" air-cooled radial engine installed in the Loening OL-8 Amphibian. 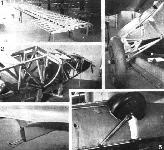 THE LOENING OL-8 AMPHIBIAN: Some constructional features: (1) A wing panel, with spruce spars and duralumin ribs. (2) Forward section of hull frame (spruce), to which is bolted the sheet duralumin covering. (3) The neat tail-skid unit. (4) and (5) The Amphibian landing gear, shown "down" and "up."

THE LOENING OL-8 AMPHIBIAN: View of the latest model of this successful type of machine in flight. It is fitted with a 425 h.p. Pratt and Whitney "Wasp" aircooled radial engine.

THE AIR MINISTER DEPARTS: Sir Samuel Hoare sets out from Felixstowe in the Blackburn "Iris II" (three Rolls-Royce "Condors") en route for Copenhagen, August 12. Generally similar to the "Iris I," this flying-boat has an all-metal hull. Note the exceptionally clean running.

THE WAKEFIELD SURVEY FLIGHT AROUND AFRICA: This photograph of Sir Alan Cobham s Short "Singapore" beached at Malta, gives an indication of the "strafing" which the machine received during the gale. It is an eloquent testimony to the strength of metal construction that in spite of the damage sustained by the lower port wing, the metal hull is perfectly intact. There is little doubt that under similar circumstances a wooden hull would have been wrecked.

A NEW DE HAVILLAND MACHINE FOR AUSTRALIA: Three views of the D.H.61 in flight during recent tests at Stag Lane, piloted by Capt. Broad. 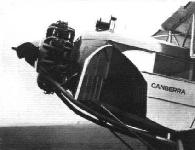 A NEAT INSTALLATION: The Bristol "Jupiter VI" in the D.H.61. Large exhaust pipes taken under the fuselage reduce the engine noise to comfortable proportions. The hot air muff for heating the air in the cabin can be seen on the pipe on the port side. Note also the large front luggage compartment, which will take a cabin trunk or two. 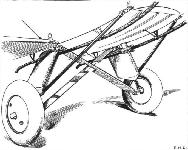 An unorthodox undercarriage: On the D.H.61 there is no wheel axle across from side to side, the two halves of the chassis being quite independent of each other. The wheel track is very wide, and a large travel of the wheels is obtained.

NOVEL PUBLICITY: This is a Blackburn "Bluebird Mk.II" (Genet engine) on show in the motor showrooms of Francis E. Cox, Automobile Engineer, Leeds. It attracted the keenest public interest, for thousands viewed it during the ten days' exhibition. A number of new members were enrolled in the Yorkshire Aeroplane Club, whilst a few enquiries received may develop into sales. It is interesting to note, too, that the showing of this light aeroplane materially stimulated interest in the Essex and Wolseley cars in the same rooms.

THE CURTISS "CONDOR": Two views showing the somewhat unusual arrangement of the gun stations. One is located in the nose of the fuselage, whilst two others are situated one at each rear end of the engine nacelles.

The Great Flying-Boat Cruise: Our picture shows one of two all-metal Supermarine "Southampton" flying boats that are being shipped to the East in connection with the R.A.F. Far East flight. It - that is, the hull - is being transported by road, in a neat little packing-case, from Southampton to the London Docks. The wings and other fittings are disposed of separately, in extra suit cases!

MELBOURNE AIR PORT: The new air port of Australian Aerial Services, Ltd., at Melbourne, which were opened recently by His Excellency, the Governor-General. The new premises - which are shown at close quarters - adjoin a dead-end tributary of the river Yarra, which, it is intended, will be used as a seaplane base. The machines shown include a Sopwith "Wallaby" and A.N.E.C. biplane.