Handley Page's response to B9/32 was the HP.52 K4240. This entered production as the Hampden.
This view of the prototype H.P. 52 shows the small amount of wing dihedral.

The prototype B22/45 Wellesley, K7556, differed considerably from the private venture monoplane

Wellington of 9 Squadron, complete with the 'dust-bin' turret

Recovered from the bottom of Loch Ness in September 1985, Wellington IA N2980 is now restored to its geodetic glory and on display at the Brooklands Museum.

The Vickers B9/32 with glazed areas in the nose and tail.

The centre cell of the bomb hay of a Wellington showing two 250 lb bombs.

IN SERVICE SOON: A new view of the Pegasus-engined Vickers Wellington I medium bomber, which will before long be standard equipment in the R.A.F. There is a Nash and Thompson multi-gun turret in the nose and stern, and a third gun position amidships.
View of the prototype Wellington Mark I, L4212, first flown on December 23, 1937, from Brooklands with “Mutt" Summers in command. It was later converted to DWI status. 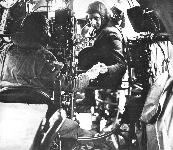 View of the interior of a Wellington Mk.I. There was no dividing door between the cockpit and radio section. Note the flare pistol to the right of the second pilot.

Top: Wellington I prototype - plus scrap view of its tail, three-view: Production Wellington I with dustbin' turret shown in deployed position.

The biplane G4/31 K2771 ground-running at Brooklands in mid-1934. The fuselage used geodetics.

Personnel give scale to the Type 207, built to Specification M1/30. This short-lived 1933 prototype was Barnes Wallis's first ‘entire’ aircraft design