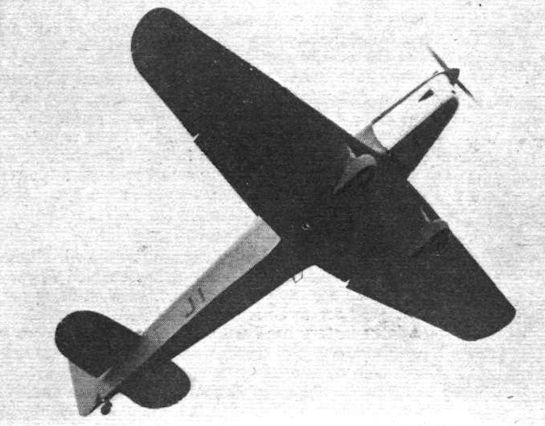 MODERNITY in a TRAINER
Advanced Features of the Parnall 382 : Slots and Slotted Flaps

THE new Parnall 382 is an elementary and special purpose trainer of slightly higher power than is usual and is fitted, interestingly enough, with H.P. slotted flaps and leading edge slots. It is of all-wood construction, with ply covering for the wings and fuselage, and it can he obtained with open cockpits, with a sliding hood or with variations to suit training needs. The use of a Gipsy Six Series II engine allows the machine to be used for specialised training purposes, while the slots and flaps give it very good stalling characteristics - though the spin and recovery are normal. It can be flown solo from either seat without ballast.

Britain's Military Aircraft
A Survey of Our Service Machines

THE Parnall 382 monoplane trainer is now undergoing development, but the following description, in the main, will still apply. The machine is a low-wing monoplane with fixed undercarriage, and is equipped with Handley Page slots and slotted flaps. Construction is all wood with ply-covering for the wings and fuselage, and the machine can be built with open cockpits or with a sliding hood over the rear seat which accommodates the instructor.
The standard power plant is the D.H. Gipsy Six Series II which drives a fixed-pitch airscrew and gives a top speed of 155 m.p.h. The take-off run with full load in a 5 m.p.h. wind is 180 yards.
Demonstrations have shown that the machine is extremely manoeuvrable, and that, while the slots and flaps give it very good stalling characteristics, the spin and recovery are normal.
The span is 33ft. 8in., and the length 28ft. 9 1/2 in. Empty the machine weighs 1,665 lb., the all-up weight being 2,450 lb.
By using the slots and flaps the 382 can be flown at 43 m.p.h. with the engine off. The stall is not reached until the angle of incidence is over 30 deg., eliminating the possibility of accidental stalling on the glide. 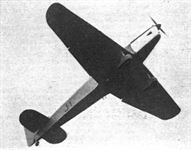 The prototype 382 in the air. Notice that it is being flown solo from the front seat.

A new training aircraft which has acquitted itself well in trials is this attractive Parnall monoplane. The engine is a D.H. Gipsy Six. In the version shown the rear cockpit is enclosed. 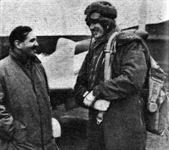 Mr. B. B. Henderson, the designer, with Mr. J. A. C. Warren, test pilot - whose headgear tempts us to pin a quip on his name.

A view from the control tower of a small section of the large crowd at Wilmington last Saturday. In the background can be seen a B.F.W. M-35, Tipsy, Wicko and the new Parnall Trainer.

"Slottery and flappery" is an important feature of the Parnall’s specification. The inner portions of the flaps can be depressed to 45 deg. and the outer portions, which function as ailerons, can be lowered about 15 deg. The other appendages are the numerous inspection doors, shown open.

The Headmaster’s Study: Believing that both instruction and performance will benefit, Mr. Henderson has designed this coupe enclosure for the instructor’s cockpit. The blind-flying hood is folded neatly down inside the front cockpit.

Details of the undercarriage and its attachment to the front spar. The spat is divided transversely.