<...>
(Junkers T 19)
Although in its general constructional features it is similar to other Junkers machines, the type T differs materially in that it is a parasol monoplane of the "open" type, intended for school work and sports purposes. The same tubular construction and corrugated sheet covering is used as on the other types, and the undercarriage is also similar in general design. The fuselage is of triangular section, or, more correctly speaking, of trapezoidal, as it does not quite come to a sharp edge on the lower corner. The sides have in consequence a distinct outward slope, so that the undercarriage telescopic struts are attached to the top longerons instead of the usual procedure of securing them to the lower.
The two occupants are seated tandem fashion in a common cockpit, entrance to which is by a triangular door, which forms, when closed and locked, part of the load-resisting structure. This door forms the subject of a sketch.
The wing, which is of usual Junkers tubular construction, is mounted in a somewhat unusual fashion so as to avoid members running diagonally across the sides of the cockpit and being in the way. The front spar is supported on each side by a "tripod" strut, while the rear spar has two struts on each side, one approximately vertical and the other sloping back so as to triangulate the structure and locate the wing in a fore-and-aft sense.
The most interesting feature of the Junkers type T is perhaps its engine, which is of Professor Junkers' design, and is unusual in that it is air-cooled, although being of the six-cylinder, vertical type. A fan mounted in the nose of the machine forces air back through ducts surrounding the cylinder heads and exhaust valves, so as to obtain forced draught past the hottest parts. At present the makers do not wish particulars published, as the engine is still in the experimental stage, but it may be stated that it is of 70 h.p. The type T can also be supplied fitted with 60 h.p. Siemens or 120 h.p. Mercedes engine.
Fitted with the Junkers 70 h.p. engine the data relating to the type T are: Length o.a., 7.5 m. (24 ft. 7 ins.); span 13 m. (42 ft. 8 ins.); useful load, 350 kgs. (770 lbs.); speed, 145 km. (90 m.p.h.).

THE THIRD INTERNATIONAL AERO SHOW AT PRAGUE
THE GERMAN EXHIBITS

The third type exhibited by Junkers was a machine of very unusual design, known as the type "U." Perhaps this machine may best be described as being the "Pinguin shown at Gothenburg, but with a lower plane added, thus turning it into a biplane. The machine shown at Gothenburg was known as the type "T," and the Prague machine, with the lower plane added, is called the type "U." The construction is similar to that described and illustrated in FLIGHT of August 9, 1923. The fuselage is of trapezoidal section, wide at the top and almost coming to a sharp edge at the bottom. The main structure is in the form of Duralumin tubes, and the covering of wings as well as of fuselage is corrugated Duralumin sheet. The engine is one of the new Junkers 6-cylinder vertical air-cooled, a fan in the front covering drawing air into the cowling and discharging it across the cylinder heads. The engine, of which no particulars could be obtained, is rated at 70 h.p. The type "U" has an overall length of 7-5 m. (24 ft. 7 ins), a span of 13 m. (42 ft. 7 ins.) and a wing area of 32 sq. m. (345 sq. ft.). The total loaded weight is 860 kgs. (1,890 lbs), so that the wing loading is only 5-5 lbs./sq. ft. Speed, 140 km./h. (87-5 m.p.h.).

The famous German firm of Junkers-Luftverkarhr A.-G., of Dessau, will be represented in the Round-Germany Competition by no less than eight machines, six of which are of their own manufacture, the other two being Focke-Wulf monoplanes fitted with Junkers L.I.A engines of 78 h.p. As a description of the Focke-Wulf machines has been given elsewhere, there is no need to refer to them here except to mention that the Junkers engine is fitted.
Of the six Junkers machines entered four are of well-known types, while the remaining two are of a type specially designed for the Round-Germany flight. Two machines of the K.16 type have been entered and two of the T.26 type. Both of these have previously been illustrated and described in FLIGHT.
<...>
The T.26 is a parasol monoplane, but as distinct from the K.16 it has a fuselage with open cockpits and is mainly intended for school work. The construction is similar to that of the K.16 in that it is entirely of metal, although some of the members are of slightly different form. The engine fitted in the T.26 is a Junkers L.I.A of 78 h.p. This engine, although air-cooled, is of the vertical type, cooling being facilitated by mounting in the nose of the fuselage ahead of the engine a blower which forces air through special ducts or passages to the hot cylinder heads. The machine and engine were first exhibited at the Gotenburg Show in 1923, when it was described in FLIGHT, but since then little has been heard of it in this country. It will be interesting to see how this type of air-cooled engine behaves in the stiff tests provided by the Round-Germany flight.
The main characteristics of the Junkers T.26 are: Length o.a., 7-54 m. (24 ft. 10 ins.); span, 13-15 m. (43 ft.); wing area, 21-5 sq. m. (231 sq. ft.); weight, empty, 500 kg. (1,100 lbs.); useful load, 230 kg. (505 lbs.); total loaded weight, 730 kg. (1,605 lbs.). The top speed is approximately 130 km./h. (181 m.p.h.); and the landing speed 80 km./h. (50 m.p.h.). The ceiling is 3,200 m. (10,500 ft.).
<...>

Only known photograph of the Junkers H.21 in Tehran - standing in front of the hangar to the left. The other two aircraft are F.13s.
J 22

The single-seat J 22 fighter, first flown on November 17, 1923, was not accepted for production at Fili due to its poor performance.
T 26 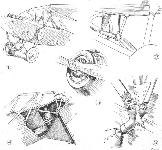 JUNKERS AT GOTHENBURG: (Junkers T 19) 1 is a perspective view of the small school machine, type T, which is fitted with a six-cylinder vertical air-cooled Junkers engine. 2 details of the undercarriage. 3 the fan which is used for cooling the air-cooled engine. 4 access to the cockpit of the type T is gained through a triangular door. 5 a typical strut assembly. 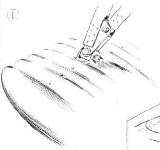 SOME GERMAN CONSTRUCTIONAL DETAILS AT PRAGUE: 1. The strut-attachment on the lower plane of the Junkers type "U." 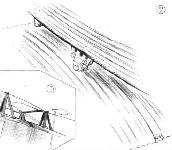 SOME GERMAN CONSTRUCTIONAL DETAILS AT PRAGUE: 2. Attachment of lower plane to fuselage on the same machine.
<<   0/0   >>