AN interesting visitor to the Croydon aerodrome during last week was a large three-engined Junkers monoplane; interesting partly because of the fact that the machine brought over close upon ?10,000,000 worth of bonds, and even more so because this is the first time that the latest type of Junkers passenger carrier has been seen at a British aerodrome.
Photographs of the machine have previously been published in FLIGHT, but a considerable number of further particulars have now become available, which should be found of no inconsiderable interest.
The Junkers monoplane, which has been built, under licence, by the A. B. Flygindustri, Limhamm, Sweden, arrived at Croydon about noon on Tuesday of last week, carrying, as already stated, Reparations Bonds to the value of ?9,660,000. Originally, it had been intended that the Junkers machine should arrive with its valuable cargo on Monday of last week, but bad weather delayed the arrival until Tuesday. The machine was piloted on this flight by Mr. Linner, the well-known Swedish pilot, and the following passengers were carried: Dr. H. H. Hagemann, who is manager of the Junkers Company, Herr Geheimrat, Hientzche, and Herr Sommerlad, officials of the German Debt Commission. These officials supervised the transfer of the sealed boxes containing the bonds from the aeroplane to motors conveying them to the Bank of England, and later the same officials attended at the breaking of the seals and the counting of the bonds. The fact that air transport should be regarded as the safest mode of conveyance for such valuable cargo is significant.

THE JUNKERS G.24.L: This side view gives a good idea of the cabin, and the men standing in front of the machine give scale to the picture

THE JUNKERS G.24.L: Three-quarter rear view. Note how the wing engine cowling is faired into the wing surface

THE NEW JUNKERS THREE-ENGINED MONOPLANE G.23: Built by the Swiss Adastra Company, this machine carries 10 passengers. An idea of the size is provided by placing on one of the wings of the large machine, the Bahnbedarf B.A.G.I. light monoplane with Blackburne "Tomtit" engine.

THE JUNKERS G.24.L: Three views of the machine, flying overhead, coming in to land, and taxi-ing up to the Customs House at Croydon.

Opening of Seville - Lisbon - Madrid Air Line: H.R.H. The Prince of Wales descending from the Junkers G.24 monoplane belonging to the "Union Aerea Espaniola," on the occasion of the inauguration of the new service recently.

THE AMSTERDAM AIR TERMINUS: The lower photograph shows the hangars, offices, etc. at the Schiphol aerodrome. The international character of this Dutch airport may be gathered from the machines in front of the buildings, which include a Farman "Jabiru," a three-engined Junkers monoplane, a Fokker monoplane, and a Dornier monoplane. The upper photograph shows the aerodrome restaurant where excellent meals are served, and from which a good view of the aerodrome, machines, etc. is obtained.

A pair of Junkers Ju.86s (one with Jumo diesels) paraded at Tempelhof with a Heinkel He.70 and an early Junkers used for testing the original Jumo. A Ju.52 peeps in at the top corner.

In June 1928 two Junkers F.13s and a single three-engined G.24 were delivered from Germany in Afghanistan.

The Junkers G.24 that was presented to King Amanullah by the German Government.

In addition to the black Afghan national flag with coat of arms the G.24 carried the king's red flag with his personal emblem. The coat of arms was used a national insignia during the period 1924-1928.

THE JUNKERS G.24.L: The view on the right shows the three Junkers L.2 engines and their housing. The top cover of the nose is shown raised for inspection of the engine. On the left is a view of the tail. Note the large horn balance of the elevator, and the negatively cambered tail plane.

THE SERIOUS SIDE: A three-engined Junkers seaplane belonging to the Swedish Air Transport Company.

IN YET ANOTHER GUISE: The new Junkers G.23.W three-engined monoplane is produced as a land aeroplane with a variety of engines, according to whether it is to be used in restricted German air services or in other countries. It has now been successfully tested as a seaplane also, and is stated to get off very quickly. The machine here shown was built in Limhamn in Sweden under licence, and in one flight no less than 18 persons were carried. Like all other Junkers machines the G.23.W is of all-duralumin construction.
Junkers F.24

FOR THOROUGH TESTING IN THE AIR: The Junkers type F.24 into which the Junkers "Jumo 4" heavy-oil engine has been fitted. 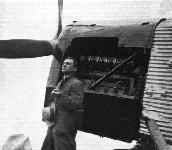 EXPLAINING HOW IT WORKS: Dr. Gasterstedt, one of the designers, explaining to visitors to Tempelhofer Feld the principles upon which the Junkers heavy-oil engine is based.