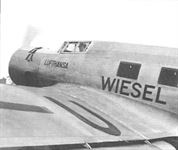 D-UVUX at Tempelhof. The engine cooling gills are partly open. The cockpit windows should be compared with those on the starboard side in the side view of D-UQOR.

D-UNOR with rectangular window in the door, full-depth rudder, and tailskid.

D-UNOR Luchs, the proto­type Ju 160, showing the inward-retracting undercarriage and longer flaps.
FOR LUFT HANSA: The Junkers Ju.160, developed from the Ju.60, has been built for "express traffic" work. A 700 h.p. B.M.W. "Hornet radial (Pratt and Whitney licence) gives it a maximum speed of 211 m.p.h. With Hamilton adjustable pitch airscrew the machine cruises at 186 m.p.h. and carries a disposable load of 2,535 lb. The N.A.C.A. cowling contain a forced draught arrangement which directs hot air from the engine downward to avoid fouling the cockpit and cabin.

This view of D-UQOR shows the asymmetric cockpit fenestration (windows to you), cutaway rudder and faired tailwheel.

The Junkers-Ju 60 D-2400 with undercarriage fully retracted. The aircraft broke with Junkers tradition by having two-spar instead of multi-spar wings, and a smooth-skinned oval-section fuselage instead of the familiar corrugated box.

The Ju 60 D-2400 with flaps partly lowered. It bears the name Luft-Hansa (in capitals and with a hyphen) on the engine cowling and Pfeil on the forward fuselage.

The modified door of production Ju 160s is apparent in this view of D-UKAN.

The asymmetric canopy and horn-balanced elevators are evident in this view of D-UVOX.